I’ve been watching a documentary series on CNN called The Sixties. It’s a ten-part look at the influence the 1960s had on American culture and society, with episodes devoted to topics such as the Cold War, JFK’s assassination, the Space Race, and Vietnam. It covers the gamut from television and politics to sex, drugs and rock ‘n roll.

And I find it completely fascinating.

I was alive in the 60s, albeit barely. A whopping eight months of my life existed in that decade. Yet, I find its influence touches so many different aspects of my life, I’m amazed.

I identify with the 70s and 80s more. I suppose that’s natural. My parents tell me I witnessed the moon landing, but for some strange reason I can’t remember a single moment. I suppose that might have something to do with the fact that I wasn’t quite three months old when it happened. While Neil Armstrong was making one giant leap for mankind, I was spitting up on my mom’s shoulder. I was a real underachiever in comparison that summer. 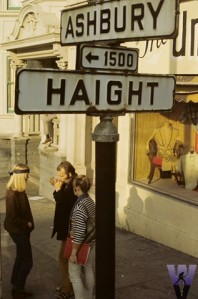 Despite my limited engagement with the turbulent decade, I am inexplicably drawn toward it. I have been fascinated with the Vietnam War for as long as I can remember. And Woodstock. Peace signs, hippies, tie-dye. My dream vehicle is a VW Bus (and a very specific one, at that; I want the split-windshield version, which was only manufactured until 1967). I love psychedelic music. Janis, Jimi, The Doors, all are  faves. Harvest gold and avocado green appliances. Beaded curtains. Retro furnishings. Tang. All of these scream me.

We were all watching the season finale the other night. It focused on the counterculture movement: hippies, LSD, psychedelic rock, Haight-Ashbury, the Summer of Love, Timothy Leary, Ken Kesey, Woodstock and free love. While Tara and I verbally embraced the ideals of the hippie movement and appreciated the causes they were championing, all Audrey saw was a bunch of long-haired, dirty drug addicts. Which led to a big discussion on idealism, individualism, and the extreme divides that sometimes split generations.

I tried to explain as best I could, from the perspective of an outsider looking in (my birth year notwithstanding), how the countercultural revolution was an honest attempt to shake up the status quo. That it wasn’t just an excuse to get stoned and make love to everybody you met. Those were just perks! (I kid, I kid). Hippie ideals espoused cultural diversity, spirituality, sexual freedom, environmentalism, heightened consciousness, and self-sufficiency. They rejected materialism, opposed war, and believed mainstream society was ultimately flawed and corrupt. Their goal was to develop a Utopian society free from constraint.

Love ’em or hate ’em, it’s hard not to appreciate that type of thinking.

A while back, my blogging friend Ron wrote a post about reincarnation. OK, it was 2008. A long while back. He had an experience while visiting Japan in which he felt such an overpowering sense of deja vu, he began to question whether he had once lived there and taken part in the rituals he was observing. I can relate, because I sometimes think I have lived a past life, too. I have long had this unshakeable idea, crazy as it sounds, that I was a soldier who died in the Vietnam War sometime in the 60s.

I will be the first to admit this sounds far out (and not in the “groovy” sense of the phrase). I am one of the least spiritual people in the world, and don’t have a religious bone in my body. But maybe that very ambivalence is what allows me to be so open to the idea of reincarnation. Because I do believe in an afterlife, just not a Pearly Gates version. And if there can be an afterlife, why not a beforelife, too? If the body is merely a vessel for the soul, couldn’t that soul travel to different bodies?

About ten years ago, the Vietnam Traveling Memorial Wall came to my hometown. On a dark and dreary autumn evening plagued by a persistent light rain and bitter chill, I made a pilgrimage to the wall. I just felt drawn to it. My then-wife was not interested in going, but in truth, I did not want her there anyway. When I got there, I ran my fingers over many of the names chiseled in stone. It felt like I was searching for something, though I had no idea what. My sense of deja vu was very powerful that night.

I just…I don’t know. It’s a weird thing, and I feel funny writing about it. Almost like it’s too personal to share. Many reading this will find the idea ludicrous. I guess at this point, I really don’t care. All I’m saying is, if this nagging idea is somehow true, it would explain a lot about my life. Who I am and what I believe in.

If you’ve ever read stories about individuals who have reported past life experiences, they are pretty fascinating. A lot of times, children have knowledge of people, places, and events they otherwise should have no way of knowing about. Here is one such story I find particularly compelling. 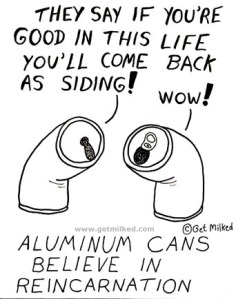