I’ve been waging an internal war over onion rings this week. 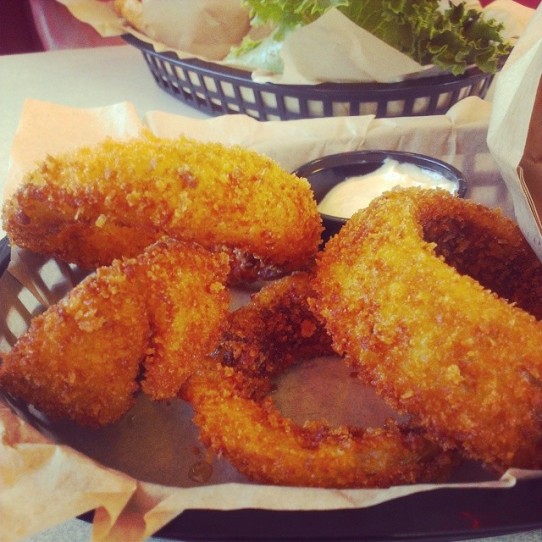 Normally, I look forward to this yearly treat with the same anticipation as baseball fans awaiting spring training. I wax eloquently over these bad boys to anybody within earshot. Within days of their annual release I’m lining up for lunch.

Ahh, but much has changed in the past year.

Namely, I almost died. So I changed up my diet, started exercising, and got healthy. Nowadays, a typical lunch looks like this instead.

Can I just say I’ve mastered the art of the wrap? Stuff a whole wheat low-carb tortilla with chicken breast, quinoa, avocado, spinach, cherry tomatoes, and feta and you’ve got one delicious and healthy lunch. Every time I assemble one, a coworker will invariably comment on how good it looks (usually while nibbling on a cookie). “I don’t know how you do it,” they’ll say, but I’m not sure exactly what they’re referring to. Avoiding temptation? Keeping fit? It’s all second nature now.

And therein lies the problem.

I won’t say I obsess over what I eat, but…

Yeah. OK. I do obsess over what I eat. So sue me! (Don’t really. I have lots of bills to pay). This is one obsession that has paid off big time, though. Ain’t nothin’ wrong with watching what you eat! And since reaching my goal weight and resolving my health issues, I’ve eased up quite a bit and am not nearly as militant as before.

But I still can’t bring myself to eat those onion rings. ‘Cause, you see, I looked up the nutritional information online. Those bad boys clock in at 230 calories and 28 grams of carbs each. Their “regular” serving of three = 700 calories and 87 carbs. Way more than I’m comfortable with.

Don’t even get me started on the creamy ranch dipping sauce.

“You can cheat one time,” Tara says. “It won’t kill you!” And I know that she is right. I could have the onion rings once, and probably would not experience a single adverse effect. Except for one:

guilt
ɡilt/
noun
noun: guilt
1. a feeling of having done wrong or failed in an obligation.
he remembered with sudden guilt the letter from his mother that he had not yet read

Annoying emotion, guilt. It’s both a blessing and a curse. Years ago I found myself mired in a relationship that was basically killing my passion for life, yet I stuck it out longer than I should have because I felt guilty breaking up with her. She had a daughter who was fond of me, you see, and…

Yeah. Stupid. On the other hand, a little dose of guilt is a great way to keep you on the straight and narrow. It’s helped me avoid the many doughnuts, cupcakes and other treats that have appeared in the office the past six months. I know if I caved in to temptation I’d enjoy them for two minutes and then feel guilty for the next twelve hours. Quite frankly, nothing is worth the aggravation.

Except maybe those onion rings…

“You only live once,” they say. Which may or may not be true depending on whether this whole reincarnation jig is legit, but I appreciate the sentiment. You might as well enjoy life’s little pleasures, right? Then again, avoiding temptations like onion rings could increase your lifespan. Then again again, what’s the point of living longer if you aren’t indulging in things that bring you joy in the first place? Then again again again, it’s hard to enjoy the finer things in life if you’re too wide to fit through the door to go buy them.

So, what do you think? Should I have the damn onion rings or not? If I hold out long enough the season will be over and Burgerville will take them off the menu.

11 thoughts on “On Pleasure, Guilt, and Onion Rings”