A few days ago, I received the following email.

Once again we will be hosting a customer appreciation event with a focus on Social Seciurity and helping you prepare when it comes time to retire.

Call me crazy, but if you’re holding a customer appreciation event, shouldn’t you make said customer feel, you know, appreciated? My name is not [first name]. If you appreciated me, you would know that. Don’t even get me started on the bludgeoning of the word Security. This email from my insurance agent doesn’t exactly instill confidence. How can they help me prepare for my retirement when they couldn’t even prepare to send out a properly formatted and error-free email?

I think I’ll sit this one out, thanks.

What I did not sit out was today’s potluck at work. We had an authentic Irish feast which included Italian wedding soup, Rice Krispies treats, deviled eggs, artichoke dip, and cupcakes. You know…original recipes from the old country. In all fairness, somebody brought in a “Dublin Coddle” – basically sausage, bacon, onions and potatoes. In other words, pretty much the entire Irish food pyramid. I love potlucks, but they’re hard to enjoy when you’re on a special diet. Because I won’t touch sugar and limit my carbs, 2/3 of the dishes were off-limits. Kind of a bummer…damn if those cookies didn’t look good…but my body thanks me for it. And there were still some really good dishes I did not shy away from.

The real draw of the potluck was the raffle prize: everybody who brought in a dish was automatically entered to win 8 hours of PTO. I didn’t expect to win, but earlier in the day I found one of three hidden clovers scattered around the office and earned the following prize: 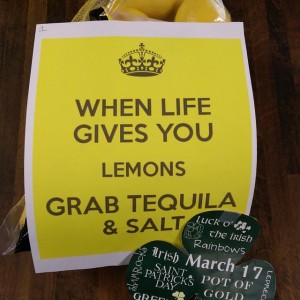 That’s a 5-lb. bag of fresh lemons. Score! Ironically, just yesterday I was talking with a coworker about how much I love lemons, so my win was fortuitous. I had a quick text exchange with Tara in which we debated how to use said lemons. Fresh lemonade, vodka sodas, and Hollandaise sauce are our top three picks. Hell, I like to add a slice or two to a glass of ice water. I’m not the only one who likes a twist of lemon in his drink, either.

I was still basking in the glow of my newfound lemonness, when the winning raffle number was called.

“Three, seven,” McKenzie said. An air of excitement filled the room, until she announced that everybody’s ticket began with 37.

“Six,” she said. Groans erupted, but not from me. I had a 6. I was still in the running. Then again, I never win these things. I held my breath anyway. 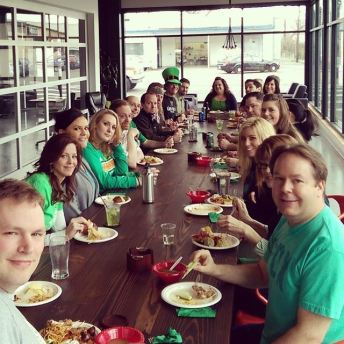 OK, I can no longer say I never win these things, because damn if that wasn’t my number. Today was a very lucky day for me at work. I came home with five pounds of lemons and a free day off, which I plan to redeem soon. I really ought to buy a lottery ticket, huh?

Hope your St. Patrick’s Day was as lucky as mine!

8 thoughts on “Not Quite a Pot o’ Gold…But Close”