“My new goal is to live to be 100,” I announced to my family yesterday.

“So I can knit tiny sweaters for penguins,” I replied. “Duh.”

By now, my wife and daughter were looking at me as if I’d lost my marbles. But the joke’s on them! I’d need to have marbles to begin with in order for that to happen.

“What are you talking about?” they asked in unison. 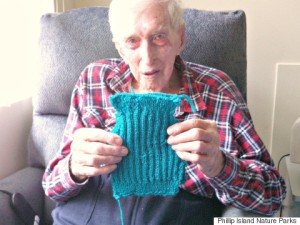 What I was talking about – or more accurately, who I was talking about – was Alfred Date, the oldest man in Australia. He is 109 years old, and his passion in life is knitting sweaters for penguins. Following an oil spill in 2013, the Phillip Island Nature Park in Australia put out a call for knitters to craft tiny sweaters for their colony of penguins to wear, in order to prevent them from ingesting oil while preening themselves. The oil also causes their feathers to stick together, making the penguins cold (irony alert!) and preventing them from hunting effectively. Alfie, as he is called, got down with his bad self and began knitting like crazy. As a result, he’s got a newfound purpose in life. When asked about his secret to longevity, Alfie replied, “waking up every morning.”

Who wouldn’t want to live to be 100? I mean, c’mon…the alternative sucks. “I don’t want to be old and infirm,” Tara said.

I’d better. When I reach the century mark, the lil’ lady will be a spry 92 years old. Talk about robbing the cradle. Also, I have to live that long, because by then Alfie will be 163 and probably won’t be able to churn out quite as many penguin sweaters as he does nowadays. We can’t let these little guys go cold now, can we? 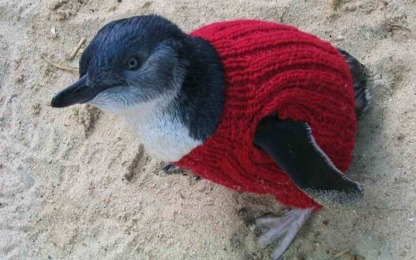 I figure, the odds are in my favor. Well, not really. Actually, the opposite is true. The odds are against me. But that doesn’t sound nearly as optimistic as the first phrase!

Statistically speaking, my diabetes puts me at risk of dying at a younger age. But my family tends to stick around. My grandmother is 97, another relative is 92, and a third is 90. And a great-grandmother lived to 100, while another hit 90. I like these trends. True, all of them are/were women. Also true, one of my grandfathers passed away at 47. But he probably never knitted a sweater for a penguin, so you know, it was kind of inevitable. Keep the body and the mind active, and the sky’s the limit. Also, f!ck you, diabetes.

Today, I used my 8 hours of free PTO and took the day off. Hello, instant three-day weekend! I am driving up to Mount Hood and taking advantage of a gorgeous spring day with a nice, long hike. Provided I don’t fall off the side of a cliff, I should be well on my way to reaching my goal of becoming a centenarian.