We watched Reality Bites over the weekend, and it made me realize how much I miss the 90s.

If you’ve never seen this movie, first off: why not!? Reality Bites, much like Singles, is the quintessential 90s movie. It is an excellent snapshot into what life was like moments before the Internet changed everything, and perfectly defines a generation. My generation. Generation X. 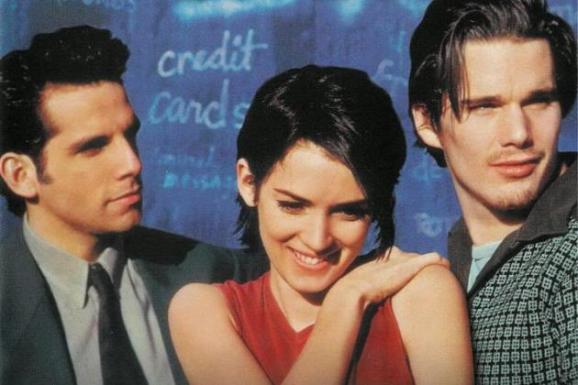 The movie already feels dated, beginning with the cast. Winona Ryder? She shoplifted her way right out of the spotlight. Ethan Hawke? He’s chosen to write novels and take roles in critically acclaimed but little seen films. Janeane Garofalo? Her political activism scared away the big studios. Only Ben Stiller has had a “conventional” acting career, though judging by the trailers for Night At The Museum 27, he really should slow it down a bit.

There’s no point to any of this. It’s all just a random lottery of meaningless tragedy and a series of near escapes.

The other things that date the movie are the things I love most about it, and miss the most about the 90s. There was both an innocence and a backlash against “selling out.” If you were an alternative rock musician and one of your songs started receiving radio airplay, you were shunned. I’m talking about you, Soul Asylum and Gin Blossoms. In the movie, Lelaina’s documentary is picked up by In Your Face (a thinly disguised MTV knockoff), and then corporatized to death, much to her horror. People felt that way back then. The creative soul of an artist was more valuable than any type of currency.

Your integrity mattered a hell of a lot more than a BMW.

The year Reality Bites came out (1994) computers already existed, but were much simpler, mainly functioning as word processors or very heavy paper weights. Printing was of the dot matrix variety and took roughly twelve days per page. Email was a novelty. It wasn’t until the following year that the last restrictions on Internet traffic were removed and it went mainstream. Ben Stiller’s character owns a cellular phone in the movie, but it’s ridiculously large and impractical. People didn’t sit across from each other in restaurants holding a 4″ glowing screen in front of their faces. Instead, they had actual conversations. “Streaming” entailed wading through water.

I remember the first time I ever went online. I started chatting with somebody on the east coast, and thought that was the coolest thing ever. I remember telling my wife, “I’m talking to some girl in Pennsylvania RIGHT NOW. How cool is that?” Because the only words she heard were some girl she did not find it nearly as cool as I did. Go figure. It was innocent, though! I also recall buying my first mobile phone. This had to be 2003 or 2004, and the truth is, I didn’t know what the hell we were supposed to do with them. There was no texting then. I justified $80 a month to the wife by saying they’d be great to have in an emergency, but no emergency ever materialized. A few years and a couple of upgrades later, I got mad at the Sprint salesman because he was trying to sell me a phone with a camera.

Lelaina: Can you define “irony”?
Troy Dyer: It’s when the actual meaning is the complete opposite from the literal meaning.

Clearly, I was living in a pre-Instagram world. Turns out they didn’t have any phones that didn’t come with built-in cameras anyway, so I bit my tongue and made the purchase. And complained bitterly about it afterwards. Looking back on it now, I can only laugh at the absurdity of my reaction.

I am not under any orders to make the world a better place.

Technology has improved my life in many ways, I cannot deny that. It has made me smarter, and definitely makes my job easier.

And yet, I still long for those days right before everything changed. For that Reality Bites world where idealistic quotes like “the only thing you have to be at age 23 is yourself” still rang true.

19 thoughts on “I Know Why the Caged Bird Sings”