I have, in the past, lamented over the fact that technology is taking over the world. I’ve mentioned how I wish we could go back in time to those carefree days where a “smartphone” was considered one that had buttons to push rather than a rotary dial, and a “web domain” was simply the home of a spider.

I take that all back now. Technology is good.

Tara decided last week she’d like to go camping for her birthday. Great idea! I love camping, too! You know who else loves camping? Every single freakin’ person who lives in the Pacific Northwest. At least in months ending with “e”, “y”, and “t”. It’s impossible to get a last-minute reservation this time of year, at least over the weekend. You can reserve a spot six months in advance, and I have a sneaking suspicion most of the really good camping spots are taken five months and 30 days early. So, no camping, right?

Not so fast. Turns out some campgrounds set aside a limited number of campsites on a first-come, first-served basis. One of those, Ohanapecosh (fun to say!!) Campground, was located smack dab in the middle of Mount Rainier National Park. A little research showed that 40 of their 188 spots were non-reservable. Perfect!, I thought, and devised a plan to make my wife’s birthday wish come true. I would take Friday off, leave the apartment super early, make the 2.5-hour trek north, and grab a spot for the weekend. Tara, who had an optometrist’s appointment at 2 PM, would leave afterwards and meet me there.

This was an excellent idea. In theory. But so were asbestos and sub-prime mortgages. I failed to take into account just how many people would show up early trying to find spots of their own, so when I arrived at Ohanapecosh (so fun – try it!!) shortly after 10 AM, I was shocked and dismayed to see the following sign. 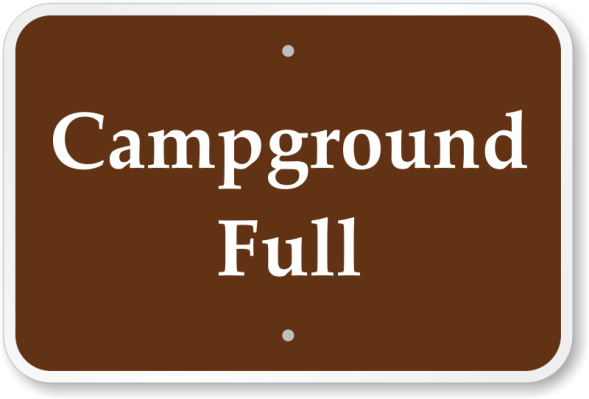 My first, naive thought was, they must be referring to the reserved sites, which have been full for the past five months and 30 days! But as I entered the campground and circled through the G and H loops, where the first-come, first-served sites are located, I found every last one taken.

Before I’d left, Tara had asked what our backup plan was. “We have no backup plan!” I told her, before adding naively, “And we won’t need one!”

I drove through a second time, but came up empty again. Just like that, it appeared our fun weekend getaway was getting away. And I realized the folly of my ways. Summer weekend, gorgeous weather…in retrospect, the possibility of finding a camping spot last-minute seemed like a fool’s quest. Still, I was so determined to make it happen, I tried to will a spot into existence.

Unwilling to concede defeat just yet, I parked my car at the visitor’s center, grabbed a folding camp chair from the trunk, and set out on foot, hoping that a walk through the campground would somehow yield better results. When I reached the 38th out of 40 possible spots, I found an empty site. I rubbed my eyes in disbelief, convinced I was hallucinating or the whole thing was a mirage, but there it was: a deserted campsite, free* for the taking.

*Actually $20 a night, if we’re being technical.

I set up the chair to stake claim to the spot (per campground instructions) then practically ran back to the visitor’s center to pay for two nights and clip my receipt into place, breathing a huge sigh of relief and thanking my lucky stars. I can only assume that the people who’d had H5 had just left, because the site was not available the first couple of times I drove past.

Once the campsite was reserved, I could relax and enjoy the rest of the day. It was 11:00 and Tara wouldn’t arrive until after 5:00, so I headed up to the Sunrise Visitor’s Center and hiked the Mt. Fremont Lookout Trail, a 3.4-mile roundtrip jaunt that crosses a ridge line to an abandoned fire lookout tower with stunning views of Mt. Rainier. The sky was brilliantly blue and cloudless and the snowcapped volcano, one of the tallest peaks in the U.S., stunning. The only drawback was the crowds (not really a surprise, given how full the campground was).

After my hike, I drove back to the campground, arriving around 3:30. Aside from the camp chair, the only other thing I had was a paperback novel, so I settled in and started reading Ian McEwan’s Atonement while the tall fir trees danced and swayed in the breeze. It was damn near perfect for a little while…but then my fellow campers began trickling in and starting fires, and the smell of cooking food reminded me how hungry I was. By 5:00 I could no longer concentrate on my book, and anxiously started looking for Tara’s truck.

This is where the lack of technology bedeviled me. There is no cell service in that part of the park, and I had not been in touch with Tara since walking out the front door at 7 AM. She didn’t even know for sure whether I’d been able to find a spot, but we’d agreed in advance that I would drive into Packwood and call her if that happened. I started wondering what would happen if she’d been delayed or never showed up for some reason, which led to a feeling of downright helplessness. I have never missed cell phone service so badly. I’d expected her around 5:30, and when she hadn’t arrived yet by 6:30, I really started to worry. Fortunately, she showed up a little before 7:00, right before full-blown panic could set in. 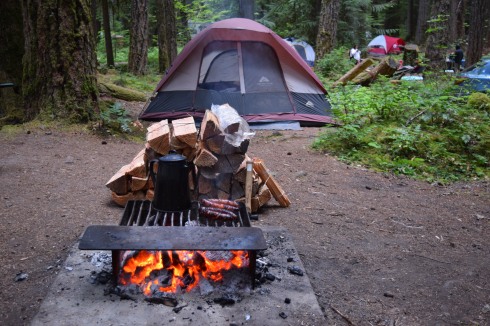 Once she got there we set up camp and got down to the important business at hand: booze. OK, that and enjoying the weekend, which turned out to be wonderful. We hiked, we cooked good food, we enjoyed amazing scenery, and we relaxed.

Oh, and we didn’t get eaten by a bear, which was another plus.

So in the end, Tara’s birthday weekend was a success. We are already planning a return trip to Ohanapecosh (it never gets old!!) next summer.

But you can bet your ass we’ll have reservations next time. Five months and 30 days in advance.

12 thoughts on “Ohanapecosh, By Gosh!”