Or whatever special place is reserved for those who flirt with nuns. Either way, I’m sure it’s going to be hot. 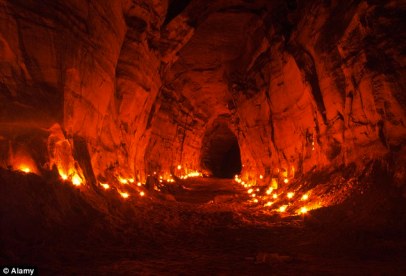 In my defense, I had no idea the matronly looking woman three booths down was a nun. I just thought it would be fun to wink at her suggestively. And then, for added measure, lick my lips lasciviously. What else is one supposed to do when dining in a salad buffet restaurant with his wife and daughter?

OK, maybe most guys don’t try to catch the attention of older women in this fashion. Clearly I am not “most guys.” When I started chuckling, naturally my wife wanted to know what was so humorous.

“I’m flirting with that older lady down there,” I said. “Just for fun.”

“You mean the nun?” she responded, without missing a beat.

Tara was not #@%^& kidding me. Somehow, I had completely overlooked the fact that the object of my fake affections was dressed in a black habit. I just thought she had long, dark hair!

Shit. Maybe I do need glasses. 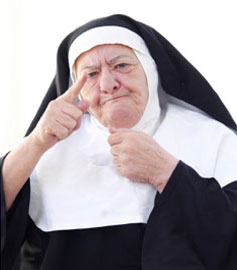 In any case, once I realized what had happened, I turned beet red. My wife and daughter, naturally, could not stop laughing. And promptly let me know I had secured a one-way ticket to Hades.

“Maybe she didn’t see me,” I said hopefully. “I’m going to grab another cup of soup.”

I got up and casually glanced at the nun as I walked by, praying (ha!) she would be engrossed in conversation with her dining companion. Unfortunately, she was gazing at me intently. And were those lips of hers pursed? Why was I looking at her lips, anyway?! I started mentally compiling a list of the number of “hail Mary”s it would take to get myself out of this jam. The figure  was depressingly high, so I just quit. I thought about smoothing things over by telling her what a big fan of Sister Act I was. Then I remembered that Deloris Van Cartier wasn’t really a nun, but a lounge singer of questionable morals.

So much for that approach.

Come, pensive nun, devout and pure, sober steadfast, and demure, all in a robe of darkest grain, flowing with majestic train.

Because I’m an optimist, I cheerfully said this was a story we would still be laughing over ten years from now.

“Unless you get hit by a bus tomorrow,” Audrey pointed out.

Crap. I’ll be checking the weather forecast very carefully from now on. Gotta watch out for a stray bolt from the blue. 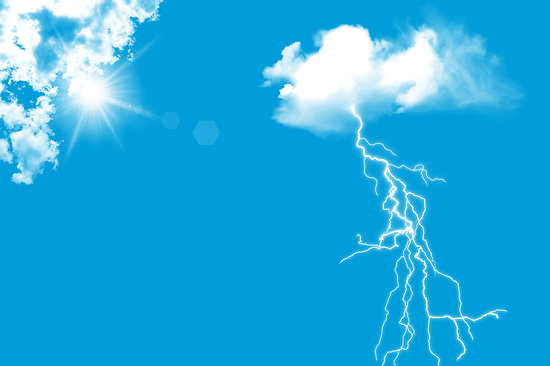 20 thoughts on “Hard Habit to Break”