For the second time this year, I made a fool of myself at the movies.

A few months ago, I inadvertently played an obscene song over my phone in a quiet theater. It was a classic case of smart phone, dumb user. Or, in my defense, new user…but still. Apparently not content to rest on my laurels and let that incident be my sole cinematic faux pas of 2011, this past Tuesday I found myself in a similarly embarrassing situation in an auditorium full of people.

I had gone to see Moneyball. Paid for my ticket, presented it to the Person Who Tears The Ticket In Half, who directed me to “Theater 1, on your left.” I’d been to the movies many times over the past year, and was more than familiar with Theater 1. I whipped out my phone while walking over there (hmm…seems to be a common denominator), checking e-mail. Sauntered into the theater, which was deserted except for one other person, and grabbed a prime spot – back row center. Oddly enough, the “First Look” pre-movie commercials and trailers weren’t playing yet. Normally, they start about twenty minutes before the feature, and according to my phone, we had only fifteen minutes to go. Finally they started, but there was no sound.

Technical difficulties, I surmised. They obviously explained the late start.

I glanced at my phone again, and saw it was 12:24. The movie was supposed to begin at 12:15. I chalked it up to those same technical difficulties. By now, the theater was pretty crowded. At 12:30, the lights went dark and the coming attractions began. I sat through five trailers, and then – after the usual cinematic fanfare – the movie began.

The opening scene showed a desert. ISRAEL. 1966, according to the caption. It was in that moment that I had a sinking feeling in the pit of my stomach. Moneyball is a baseball movie…about the 2002 Oakland Athletics. To say this didn’t feel right was an understatement. However, I reasoned that perhaps this was a flashback scene to Billy Beane’s birth (he was actually born in Orlando and isn’t the least bit Jewish, but I didn’t know that at the time). After all, the character is played by Brad Pitt, and he is 44 years old in the movie. Conceivably, the scene could make sense.

But then soldiers appeared onscreen, and I realized I had made a horrible mistake.

I then had a decision to make. Should I get up and walk out of the theater sixty seconds into the movie, all but admitting to the other patrons that I was an idiot? Or should I just sit through the mystery film, which – even though I had no idea what it was or who was in it – might turn out to be pretty good? By now, Moneyball would be fifteen minutes in. What if I had missed a crucial scene? After a few seconds of internal debate, I decided that I really wanted to see the baseball movie and not something I didn’t even know the name of, so I got up and left the theater as quickly and unobtrusively as I could. Upon exiting, I found that I had accidentally walked into Theater 2 while messing around with my phone. Which, in my defense, was right next to Theater 1. I mean, it’s like, here’s a door. And here’s another door. Side by side. Anybody could have made the mistake! 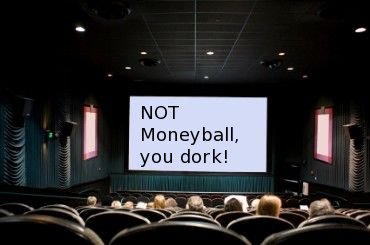 I drew a deep breath and plunged into Theater 1, which was dark…and very full. I didn’t want to bother the other people while looking for a good seat, so I just slid into the worst one possible – the front row corner – and ducked my head down low. God, I hate that seat. For one thing, you have to crane your neck at a weird angle to watch the screen. For another, I’m used to the back row…being up front, everything looked much too large. And also, if a crazed gunman walks into the theater and starts shooting, guess who’s going to take the first hit? That’s right. The guy in the front row corner seat. I tried not to think about this too much lest I drive myself crazy with irrational fear. The movie had started, of course. Fortunately, I don’t think I missed anything too important. The setup was just occurring – the A’s have slashed their payroll, ditched their big-name star players, and Billy Beane has to put together a winning team on a severely limited budget. Got it.

After awhile, my embarrassment receded and I was able to enjoy the movie. Which turned out to be quite good, by the way. Brad Pitt was excellent in his role, and the film had drama, suspense, action and some fun what-really-happens-behind-closed-doors-of-professional-sports-wheeling-and-dealing scenes. I’ve heard good things about Killer Elite, too – but I’m glad I went for Moneyball.

On the plus side, I was the first one out of the theater when the movie ended.

As much as I love going to the movies – especially on $5 Tuesdays – this latest incident has scarred me badly. It may take a few weeks before I can muster the courage to once again try to decipher which door leads to the correct theater for the movie I think I am about to see. Although I suppose the simplest solution, of course, is to keep the phone in my pocket while navigating the intricate maze of darkened auditoriums in the first place.