We made a Target run this morning, but managed to stay within budget for a change, only spending $150 when our shopping list totaled about $60. If you’re questioning how spending 2.5 times what we’d planned constitutes fiscal responsibility, then clearly you have never shopped at Target. Last time, we dropped $295 after planning on spending $75, so clearly, this is progress.

In the name of efficiency, we often split up in Target. Not in the “I’ve had enough of you, you stupid jackass!” sense; what I mean is, we go down different aisles to grab what we need. Tara is usually stockpiling cleaning supplies and toilet paper, while I’m hovering near the wine section. What can I say? We have different priorities. (We’re still not splitting-up-splitting-up, though.) In any case, after I’d grabbed a bottle of sauvignon blanc, I went to track her down. Found her in the pet food aisle, and to my delight, she was choosing cans of cat food very carefully, alternating flavors to ensure that Sydney had a wide variety.

That is true progress, because once upon a time, she scoffed at me for doing the same. One day soon after we began cohabitating, we were shopping for groceries and I freaked out because Tara was grabbing cans of cat food from the shelf and throwing them in the cart willy-nilly.

“Buying cat food?” she said, turning a declaration into a question the way people do when they think the answer should be plainly obvious to the person with whom they are conversing. And then, adding insult to injury, she did it again: “It’s on the list?”

She stared at me blankly for several long seconds, oblivious to the point I was trying to make. “Yes, and…?”

Clearly, Tara had never gone shopping for cat food with me before. Not only do I mix up the flavors so no two cans are identical; when I stack them in the pantry I alternate between different proteins. Beef/chicken/fish. She’ll never be stuck in a rut with me around, that’s for sure.

“Sydney needs variety! It’s the spice of life, you know!”

At that point she laughed out loud. Said cats will eat whatever is in their dish and would happily scarf down chicken in gravy for a month straight without complaint. I, however, refused to accept this faulty logic. “Maybe so,” I conceded. “But she’ll grow sick and tired of it. She cares! I know she does!”

My soon-to-be wife simply rolled her eyes and humored me as I replaced all those cans of chicken with tuna and lamb and turkey.

Eight years later, here she is, doing the same thing she ridiculed me for when we first got together. And yes, she even stacks them in the cupboard the same way I do.

I’m glad she has finally seen the light.

Saturday was warm. Record-breaking, even. Our high was 74º, which is about 30 degrees above average. With bright sunshine and a rare early taste of spring, Tara suggested we take advantage of the weather and go hiking. And with memories of last weekend’s Badlands trip still fresh, we decided to head out late in the afternoon so we would reach the summit of Buzzard’s Roost right around sunset.

This was an excellent idea…in theory. But once we arrived at the trailhead, we realized we might have been a little overzealous and jumped the gun a bit. The parking lot was a quagmire of mud, snow, and ice, and the trail wasn’t much better.

Fortunately, we had hiking poles. Unfortunately, that level trail got a lot steeper. Fearing for her safety, Tara decided to turn back, but encouraged me to go on ahead. Honestly, I was fearing for my own safety a little bit too, but the summit was tantalizingly close and we’d come all that way, so I continued my ascent very carefully. There were enough bare patches along the edge of the trail to provide me with semi-solid footing, and a few minutes later, I reached the top. The trail leveled off then, and it was fully exposed to the sun, so it was more muddy than anything else.

I was well rewarded for my efforts.

I didn’t stay long, knowing that I had to get back down the trail and darkness comes quickly in the canyon. I ended up taking a different path down, which was a little bit longer but not as steep, and didn’t have as much snow and ice to contend with.

The nearly-full moon cresting the treetops stopped me in my tracks. (Literally. If I’d kept walking, the shot would have been blurry, duh.) 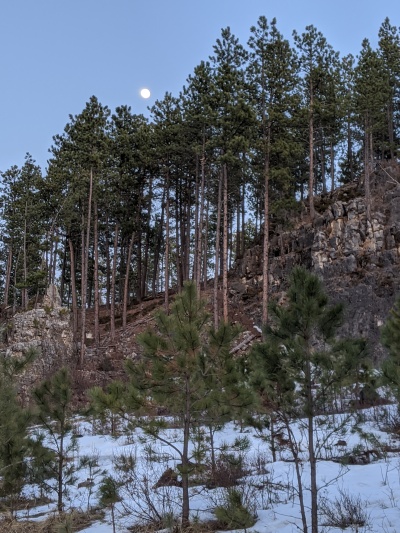 I met up with Tara at our pre-appointed rendezvous spot and we made it back to the truck without incident. And okay, fine, lesson learned: even though practically every bit of snow has melted in town, leaving our yard clear and barren for the first time in months, it’s a different story up in the Hills…especially on north-facing slopes. As eager as we were to hit the trail, it’s really best to hold off on hiking around here until April or May at the earliest.

Afterward, we drove a couple of miles to Hisega and treated ourselves to Mexican food from a restaurant we’d heard good things about.

27 thoughts on “Variety is the Spice of Life”