As far as Friday the 13ths go, this one is anything but unlucky. The Moondoggies’ new album, “A Love Sleeps Deep,” came out today. It’s been five years since their last record; that’s basically an eternity in the rock ‘n roll biz.

If you are unfamiliar with our history with the band, let’s just say much like sleeping love, it also runs deep. They are basically the soundtrack to our relationship, and against all odds, I’ve developed a friendship with their lead singer, Kevin. I am not name-dropping, by the way; hardly anybody knows who The Moondoggies are! If I were going to do that, I’d talk about the time I shook Bruce Springsteen’s hand, lol.

Seriously, though. The new record was on heavy rotation for me today. And it’s awesome. Harder and heavier than their last album, and more topical. These are good things. Kevin embodies all that I appreciate: he is an anti-Trump, feminist, socially conscious rocker who plays in a band because he loves music. He doesn’t care that his band isn’t very well known. (Having said that, you should check out the album. He might not care about fame, but I’d love it if more people “discovered” them!) 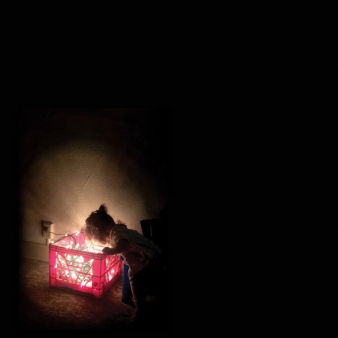 We’re going to see The Moondoggies play a show at Mississippi Studios next week. It’s bittersweet; it’ll be our eighth (and final, at least in the immediate future) time seeing them live. We’re not quite stalkers, but close. Unless they happen to play in Rapid City on some future tour, of course. Doubtful, but I do plan to run that by Kevin after the show on Wednesday.

I can also see us planning a trip back here timed around a show of theirs someday. This isn’t a permanent goodbye, guys.

Leave it to me to be a medical anomaly once again.

On Monday, I had an appointment to get my eyes checked. As far as I can recall, this was the first time I’d ever had a vision exam. There was no overriding reason for me to have one this week – I’m sort of the black sheep of my family, the only one who does not wear glasses – other than the fact that I’m covered under Tara’s plan and figured I might as well take advantage of what amounts to a free exam before we move.

I walked in there wearing sunglasses and proceeded to stumble around, bumping into walls and such, while making a general commotion. The front office staff laughed and Tara, who had arrived before me and had no idea I was going to make a grand entrance by faking blindness, said, “See what I have to live with?”

I considered that a compliment.

Because I’d never had an eye exam before, I was caught off guard when they puffed air into my eyes. For the record, they did not warn me in advance. After I jumped a little, I told the assistant to assume I knew nothin’ about what was coming next. Because, well, I knew nothing about what was coming next. The assistant apologized and told me she should have told me what to expect.

Anyway. She asked me next if I wanted dilation (no charge) or hi-res photos of my eyes instead ($20). I asked her to tell me more about this dilation thingy, and she rattled off a laundry list of not-pleasant-sounding side effects that included sensitivity to light, dizziness, and nausea, but promised these symptoms would “only last 4–6 hours.” That was a no-brainer for me. I told them I would happily fork over twenty bucks to avoid that nonsense.

So they took some crazy up-close pics of my eyes, which the doctor put up on his monitor. He pointed out my retina, optic nerve, etc. Trippy. Everything looked good, though.

This was followed by the good ol’ fashioned eye chart. At least I knew what was expected of me at that point. Afterwards, he broke the news to me.

“You’re an unusual case,” he said.

Turns out I am nearsighted in my left eye and farsighted in my right. Together, my eyes compensate for each other. I personally like to think of myself as having self-correcting vision, but the doc didn’t see it that way.

“You probably haven’t noticed any problems with your vision,” he said. A true statement. But then he had me cover one eye, followed by the other, and read more lines from the chart while trying out various prescription strengths on me. I couldn’t help but admit it: they made a difference.

So, the bottom line is this: he wrote me a prescription, but I don’t need glasses. At least not for regular, everyday use. He suggested a few different options: distance glasses for driving, especially at night; reading glasses; or progressive lenses to help with both. Now, I wasn’t falling for this sugarcoated “progressive lenses” crap and called him out on it.

“You mean bifocals?!” I asked.

“We don’t usually refer to them in those terms,” he replied, stealing a page right out of the you-can-put-lipstick-on-a-pig-but-it’s-still-a-pig book.

Really though, I’m okay with this. I have nothing against glasses, per se. The doc said it’s unusual for somebody to have reached this advanced stage of life without needing any sort of corrective lenses, so I should just count my lucky stars that I’ve gone this far and been able to see fine.

Oh, also, the eye doc really needs to work on his bedside manner.

So Tara and I will take a trip to Costco at some point and I’ll go ahead and order up a pair. They will probably spend most of their time gathering dust in their case, but I’m willing to try them out in certain situations.

Work has been pretty busy, which means the days are chugging along quickly. We only have a little over two months before our move now!

Hardly a day goes by where a coworker doesn’t comment about this. One young lady happens to have grown up on a farm in a small South Dakota town nobody has ever heard of, and her family is still there. She came in yesterday and asked, “Did you see the weather forecast?!”

She was referring to the blizzard in Rapid City today. 🙂

I just smiled and said yes, I had. I check the weather there on a daily basis. Surprisingly, I still want to move there.

Even though a blizzard in mid-April is hard to fathom. It hasn’t exactly been summer-like out here – cool and wet – but that’s typical. Winter feels like it ended long ago. Meanwhile, in my soon-to-be hometown, the snow is piling up and the winds are howling. Good thing I like the white stuff, huh?

4 thoughts on “Lipstick on a Pig”