I have a bad habit of not checking trail conditions before setting out on a hike. Had I done so, I’d have known before we drove 2+ hours on Saturday that our destination, the Indian Heaven Wilderness, was closed due to wildfires in the vicinity. I also have a bad habit of not learning from past mistakes, because this isn’t the first time I’ve been foiled in my pursuit to go hiking. Once, I drove 90 minutes, only to encounter a washed-out road cutting off access to my destination. I’d posted my plans on Facebook before setting out and my friend Mike tried to warn me, but I was miles from civilization by then.

Tara and I left bright and early Saturday morning, and arrived at the Thomas Lake trailhead around 11:00. The parking lot was completely empty, something we had never encountered before; we were so excited over this, we actually high-fived each other. Laced up our hiking shoes, strapped on our backpacks, and hit the trail…only to encounter a sign stating that hiking restrictions were in place thanks to a wildfire burning nearby. But the sign wasn’t real clear about which trails were affected, so we headed out anyway. Eight-tenths of a mile down the completely deserted trail, we came upon ribbons of pink cautionary tape blocking our path and, written in black ink, AREA CLOSED. FIRE ACTIVITY. 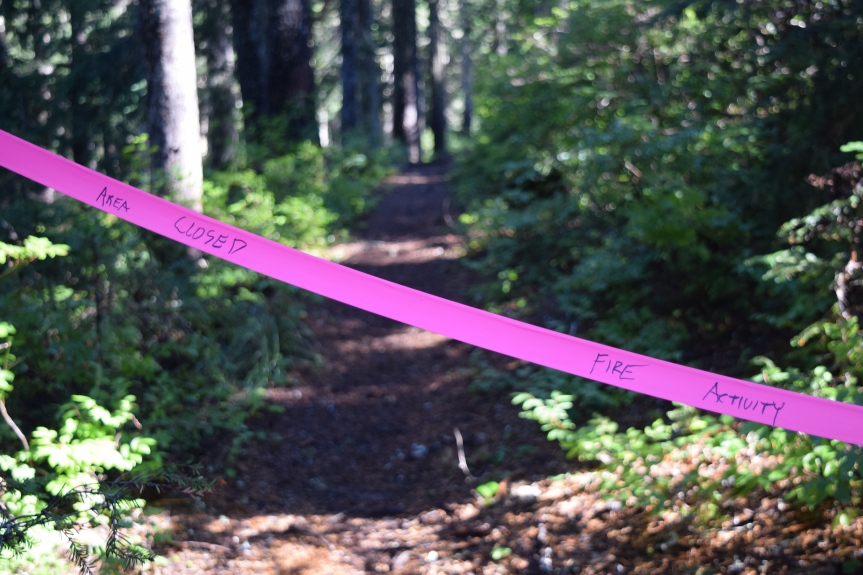 That put an end to any speculation over whether the hiking ban included our trail (not to mention plausible deniability). I mean, we easily could have proceeded anyway, but the sign at the trailhead warned of a $5,000 fine for trespassing, and that was a risk we weren’t comfortable taking. It wasn’t until later that we learned the entire Indian Heaven Wilderness was off-limits, though there had been no signs or gates posted anywhere. We’re not mind readers, USFS.

It didn’t matter too much in the end though. We’d come prepared to pick huckleberries – even had permits for non-commercial harvesting, and plastic bags and containers to fill – but were a couple of weeks too late, as there were few berries left, and those that remained were too small to bother picking. This was a bit of a surprise; usually we go around Labor Day, so admittedly we were a few weeks late, but one year we went in late September and there were still plenty of berries ripe for the picking. I know it’s all dependent on the weather though, and as hot and dry as this summer was, the lack of any huckleberries three weeks into September isn’t completely shocking.

Because of the closure we were the only ones in the forest, so we decided to take advantage of the situation and walk around the perimeter of Thomas Lake on our way back to the car. I mean, with scenery like this, wouldn’t you have done the same?!

Despite the threat of a nearby wildfire, we never saw so much as a wisp of smoke. And after a week of rain and cooler temps, the forest was good and damp. Hard to believe anything could still be burning. On the way back, Tara heard a rustling in the underbrush, and came to a dead halt. “Do you have bear spray?” she whispered, words that sent a chill down my spine. Luckily, instead of a bear, it turned out to be a large male elk in the trees maybe a hundred yards below us. We had never seen one in the wild out there before, so once again, I suppose there was a benefit to being the only ones there. Only it turned out we weren’t, as we ran into another family right before we reached the parking lot. They, too, were completely unaware of the trail closure, so at least we weren’t the only ignorant ones!

With our hiking/huckleberry picking cut short, we decided on a Plan B, which meant exploring an area of the Gifford Pinchot National Forest we had never been to. This turned into quite the adventure, and we discovered some great new spots, like the Natural Bridges, an area of rock formations that resemble bridges spanning a lush canyon. The entire landscape was ablaze with vibrant fall colors, an unexpected and beautiful surprise. Further down the road we came upon an ice cave (!) but sadly did not have flashlights and our phones didn’t provide nearly enough illumination for exploring, so we’ll have to make a return trip sometime.

In the town of Trout Lake, we stopped to snap pics of a snow-clad (and partially obscured by clouds) Mount Adams.

We ended the day in a cute little town on the Washington side of the Gorge across from Hood River called White Salmon. We walked around the one-block downtown, bought a bunch of loose-leaf tea from a woman who opened her shop as a hobby, stopped into a bar for cocktails, then hit a brewpub for dinner before heading home. No fewer than three locals told us this place had the best nachos in the world, so we had to try them.

They were made with pulled pork, pepper jack cheese, and crispy house-made tortilla chips. The verdict: very good, but “best in the world” was overselling things just a bit. We both, independently of one another, decided our local bowling alley has better nachos, lol.

In any case, it was a very nice Saturday, and I like how we just rolled with the punches and came up with a Plan B when our original plans fell through.

Tara volunteered to go up to her company’s Federal Way office for a couple of days this week to train some new people on their processes. She’s leaving tomorrow afternoon and coming back Thursday evening, staying with her mom in Tacoma. This means I’ll pretty much be on my own, since Audrey is always busy with school and work. I had kicked around the idea of taking Wednesday off and heading up to Mount Rainier for some hiking, since summer is having one last hurrah this week, but honestly, it’s about a three-hour drive each way, and spending that much time in the car eight days before we drive 1,800 miles to Rapid City, South Dakota does not sound very appealing.

I’ll probably just chill out after work, eating food that Tara does not like.