I probably need to explain…

Audrey says all her friends like me. Which is funny, because most of them have never met me. I have somehow earned a reputation as “the cool dad” amongst her peers.

I’m just real. And I treat Audrey like she’s real. Apparently, that’s a novelty to many of her friends. We talk. Not about school and chores. Well, about school and chores. But we also do not shy away from topics like drugs, alcohol, and sex. I photobomb her selfies. I say things like “peace out” when we’re ending our phone calls. I crank my rock ‘n roll when picking her up from tennis practice. And I give her enough freedom to do the things she wants to do, so long as she doesn’t take advantage of my good graces. She’s earning straight A’s, so she deserves it.

And though I shouldn’t give a damn what a bunch of 15 year olds think, I have to admit it is pretty flattering to be considered “cool.” Especially by an age group who considers anybody over 30 – actually, more like 25 – to be the very antithesis of the word.

Audrey asked me if I was popular in high school, and I laughed. There’s an adjective that never applied to me. I wasn’t an outcast, either. Didn’t fit into any of the social cliques, to be honest. When she asked me what I was, I said, “I just was.” Which pretty much sums it up. I was one of those kids who never really made waves, good or bad. People liked me, but they never went out of their way to invite me to parties or make out with me under the bleachers. I was not a jock, but I also wasn’t a stoner, a preppie, or a dweeb. In P.E., if we had to choose teams and there were 10 students, I was picked fifth. Middle of the road, all the way. Had I ever run for school council, I would have had no shot at student body president, but would have made a hell of a treasurer.

I also used to dress like Sonny Crockett. This certainly didn’t help my social standing, though it didn’t really hinder it, either. And no, I do not have pics. I’ve searched high and low, but no such luck.

So the fact that I have gained all these cool points many years later leaves me feeling stoked. Better late than never, right? 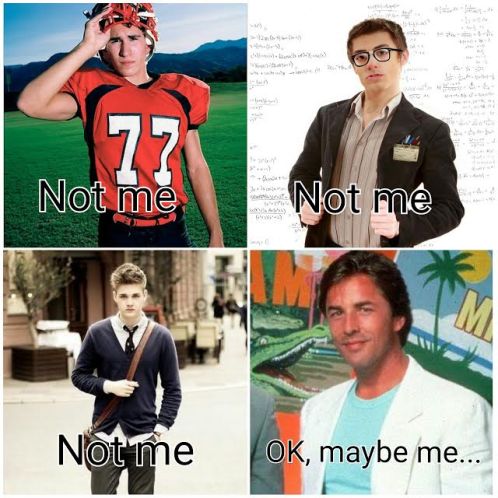 7 thoughts on “Big Man Off Campus”