I’m happy to report I survived another April Fool’s Day without getting badly tricked.

Is it just me, or has April 1st turned into a really big deal these past few years? It kinda feels like the new Halloween. Everybody is suddenly trying to outdo everybody else with increasingly elaborate pranks or really cool hacks. Like playing Pac-Man on Google Maps. (Yeah, I could not resist taking the little yellow guy for a spin through the streets of downtown Camas, WA). Amazon went retro and changed their website back to what it looked like in 1999. PlayStation advertised a gaming system called Flow that you could strap on and play underwater. T-Mobile introduced a calling plan for family pets. Even WordPress got in on the action, announcing a new feature called AutoMatton that would utilize analytics to cobble together a post from your most frequently used words for those moments when writer’s block hits. Very clever, guys.

None of these fooled me (though judging by the comments, plenty of people were suckered into believing these things were real). I’ve always been a bit of a prankster myself, and have been known to play my own April Fool’s jokes on friends and coworkers. But now that these tricks have gotten all fancy and high-tech, my Facebook “looks like I’m going to be a dad again!” posts just don’t cut it anymore.

Audrey came closest to fooling me. Tara and I received a text around noon that said,

Tara’s “WTF?” response about summed up both our reactions, before we realized just in the nick of time that my daughter was trying to pull the wool over our eyes. Well played, Audrey.

In my defense, we were slightly preoccupied at the moment. It isn’t every day you find yourself sitting across from a salesman in an automobile dealership negotiating over a new car.

And no, this is not a trick. I swear. 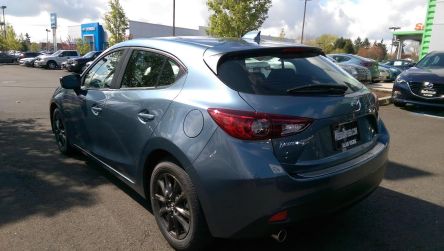 That’s a funny looking Mini Cooper, you may be thinking. Because anybody who knows me at all is well aware of my desire for a Mini. It’s the only car I’ve wanted, and I’ve been dead set on buying one for years. I mentioned it here.

I trust I’ve made my point and illustrated my obsession quite nicely. I’d been putting off buying a new car for so long, I never actually thought it was going to happen. I’d planned on doing so right after Christmas, but then I ended up in the hospital and almost died, so you know. No car.

But last Friday, on my trip to the mountains, when I parked my Hyundai at the trailhead I noticed smoke coming from the engine. Never a good sign. I’ve had an oil leak for some time and figured my car wasn’t actually going to explode or anything, but the burning smell under the hood had been bugging me for months. And then, on the way home, I pressed the button on the A/C for the first time since last fall…and nothing happened. Even though I had it repaired a year ago. Add in bad brakes, tires that were due for a replacement soon, and the fact that it was 13 years old and had 140,000 miles and…well, I just knew it was time.

A few weeks ago, sensing the end was near, I picked up a copy of Consumer Reports in the checkout line of the grocery store and started leafing through it. That’s when I saw the not-so-flattering ratings and reviews for the Mini Cooper. Turns out my dream car ranks #26 (out of 28) in terms of reliability, user satisfaction, and resale value. Further research showed that it’s just a problematic vehicle. I could have said “screw that!” and taken my chances anyway, but I’m a practical guy and refused to base such a big decision purely on looks.

Now what?! I wondered.

I went to the top of the list. #1? Lexus. Well, that was not about to happen. It’s far too rich for my blood. But Mazda landed at #2, and I’d long been a fan of the Mazda 3. So I did some research and learned that this particular car was named best compact in its class by  more than one publication.

And three hours later, after a few rounds of haggling and a fair amount of stress, I really was sold. Drove off the lot with a sporty little “mica reflex” (fancy name for blue) Mazda 3.

And promptly learned that I don’t know how to drive, because cars are so technologically advanced nowadays you practically need an owner’s manual for your owner’s manual.

But that’s a different post. Today, I’m reveling in my new purchase. Ain’t she a beaut? 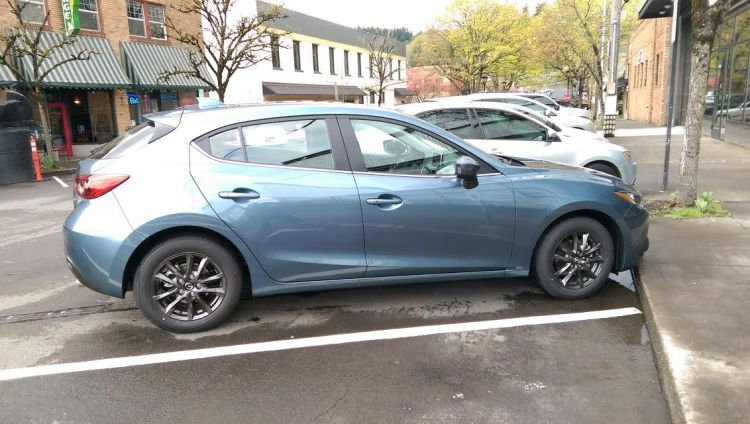