You know how that “elf on a shelf” is all the rage over the holidays? Yesterday, Tara and I stumbled upon something even better. We can’t wait to bring him home and set him up in various festive poses this season! 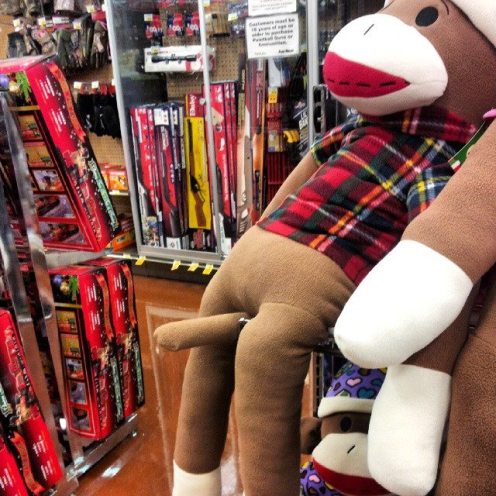 I don’t know what clever name you’d call him. The “sock monkey with a chunky”? He definitely puts the X in the Xmas Season. Mistletoe? WAY too tame. We’re all adults here.

We were shopping for really innocuous items. An ice scraper. Light bulbs. Daddy needed a new pair of shoes. Kitchen sponges. Tara wanted lip balm. I assure you, pornographic monkey was nowhere on our list. We just happened to round a corner, and I spotted him. Naturally, I burst out laughing. Tara could not figure out why, until her eyes landed upon the display of sock monkeys and she saw how stiff the competition was for Christmas gifts this season.

Now, I’m sure this was a happy accident (emphasis on “happy”). The sock monkeys have tails, as simians typically do – the better to swing from tree to tree with, of course. Probably some harried store clerk inadvertently tucked the tail beneath this monkey’s legs and never noticed that it now protruded suggestively. We could have fixed the “problem” right then and there, and in fact, I thought that’s what Tara was going to do when she walked up to the display. But…no. Not my dear wife. Instead, she rearranged the other six or seven sock monkeys propped up on display so that their tails were sticking out from between their legs inappropriately.

“But dear,” I said. “I thought erection season was over.”

“Hurry up before someone comes,” she said, and we quickly scurried away. Gotta admit, I did not think my wife had the balls to do something like this. She’s a keeper.

It could’ve been worse. At least we didn’t come across this holiday decoration in the store.

I know it’s early, but Thanksgiving is next week, folks. It’s not too soon to think about what is going up for Christmas…

15 thoughts on “Sock Monkeying Around”