I am sitting at home with the windows open, enjoying the whisper of a gentle breeze beneath a cloud-dotted sky. There’s a promise of autumn in the air this afternoon, though the weatherman is telling us we’ll be back into the upper 80s in a couple of days.

I hate that guy.

It’s Tuesday, and my Labor Day. We got back home around 7 PM last night after being away for five days, and were smart to take a vacation day today to recuperate. Traveling is draining!

We hit the road Wednesday after work, making it as far as Baker City, Oregon. That’s about five hours from Portland, and we were glad for the head start to Ely. Otherwise, it’s a really long day. The drive was uneventful until about ten miles east of The Dalles, when Tara somehow spotted a herd of rams on the side of a hill. That woman’s got eagle eyes when it comes to wildlife! We had no idea these animals lived in Oregon, so seeing them was cool. The other highlight was stopping at a pitch dark viewpoint in the Blue Mountains east of Pendleton about 10 PM for a little stargazing. We got into Baker City around 11, checked into our room, charged all our electronic devices – because that’s what 21st-century road trippin’ is like – and settled in for the night.

Thursday, we were on the road at 7 AM after fueling up at Starbucks. We took our time traversing Idaho, stopping for breakfast at the Cracker Barrel in Boise, the same place we ate when Tara met the kids for the first time. In Twin Falls, we got out at the Snake River Canyon and watched a couple of base jumpers parachute from the Perrine Memorial Bridge. Crazy bastards. Best thing about Idaho: the speed limit is now 80 mph. If you feel the need for speed, drive across the Gem State! We didn’t make it to Tara’s dad’s house in Ely until close to 6 PM, despite shaving 5 hours off our drive the day before and the super fast speed limit. Lots of stops, I suppose. Plus, we visited with her grandparents for a little while after we first hit town. Randy (her dad) made us spaghetti and we caught up over drinks.

Friday, Randy made us breakfast, then we ran some errands around town, including an aborted attempt to drive up the side of a sheer cliff to Squaw Peak in Tara’s new pickup truck. Sensing that Audrey and I were both a little, ahem, nervous over the venture, Tara wisely turned back about halfway up. All I can say is, it was too easy to picture us plummeting over the side of the mountain, 4-wheel drive or not. We grabbed sandwiches at Economy Drug, Ely’s old-fashioned soda counter, and then headed south to her uncle Ward’s 300-acre ranch in Currant. There, we picked fresh peaches, pears, grapes, plums, corn, tomatoes, peppers, and almonds, all of which Ward grows as a hobby. We then drove out to the ponds on his property for some fishing. Tara and her dad were hauling in fish as fast as they could cast their lines…and then promptly throwing them back in the water.

I don’t really get the point of fishing, but it was fun nevertheless.

What wasn’t fun, at least for Audrey, were the wall-mounted heads of all the animals Ward has shot and killed that adorn the walls of his ranch house. Audrey has a tender heart and loves animals, so she was actually traumatized by the sight. This became a recurrent theme throughout our trip and was probably the biggest reason why my daughter felt so out of place in Nevada, where hunting is as natural as brushing your teeth. We saw “mounts” everywhere: grocery stores, restaurants, you name it. And she was freaked out every time.

Back at Randy’s house we had a dinner of steak, baked potatoes, and corn on the cob with Tara’s grandparents and uncle. After dark, we drove south of town and pulled over in the middle of nowhere to look at the stars. I mentioned to Audrey how crazy it is that outer space is endless and the universe goes on forever and it completely blew her mind. Good times.

Saturday, after breakfast we drove east to Great Basin State Park. When I first came up to visit Tara three years ago, she took me there to tour Lehman Caves, and we wanted to share the experience with Audrey. It was every bit as fun as before. Such an awesome cave! On the way back we drove over Success Loop, one of Tara’s favorite drives, winding over dirt roads and beautiful landscape dotted with quaking aspens just beginning to change color. Back in Ely, we headed to Rack’s Bar & Grill to meet up with friends for dinner and drinks.

Sunday, we left Ely for Elko, driving through the ghost town of Hamilton and stopping by the abandoned Belmont Mill. Some of the buildings in Hamilton had graffiti dating as far back as 1894, so we added our names for future explorers to see. Along the way, Audrey got an impromptu driving lesson. Hey, she’ll be 15 next year! We checked into our motel in Elko and met up with family for an authentic Basque dinner at the Star Hotel. I don’t know much about the Basque culture other than the fact that they make wonderful chorizo (Tara bought 14 packages to bring back home!). Dinner was served family-style and was the strangest combination of food I have ever eaten. You start out with cabbage soup, which was surprisingly good. That was followed by an overdressed salad with a garlic-mayo dressing, plus bread and butter. Then they bring out canned green beans and baked beans, spaghetti, and french fries, plus your entree. I ordered pork chops; Tara and Audrey got sauteed shrimp. Portions were huge, but the food was a mixed bag. The entrees, at least, were excellent. I started out with a traditional Basque cocktail called a picon punch but was not impressed. Still, I figured when in Rome, right? And that’s why we found ourselves at the Elko fairgrounds after dinner for calf roping. Audrey and I felt out of place, but Tara enjoyed herself. I’m sure the beers helped.

Monday was spent in the truck. Pretty much all day…we left at 6 AM and got home around 7 PM. That’s a long haul, and I don’t think I’ll be ready to do it again for some time.

Now our vacation is over and it’s back to work tomorrow. At least it’s a short week.

Enjoy the photos, and click on any of them to enlarge. 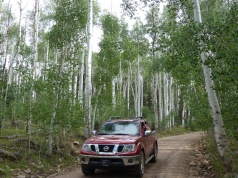 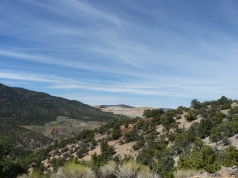 The drive to Squaw Peak. 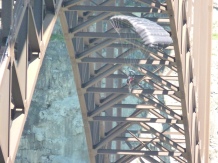 Base jumping over the Snake River Canyon.

Relaxing on the ranch. 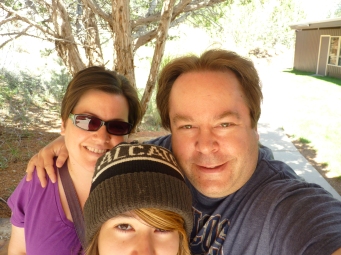 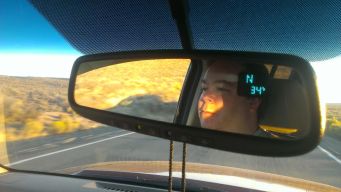 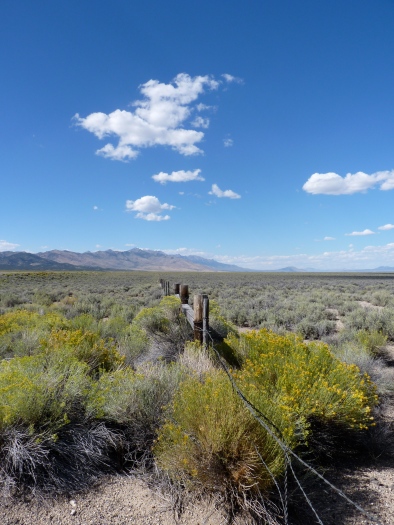 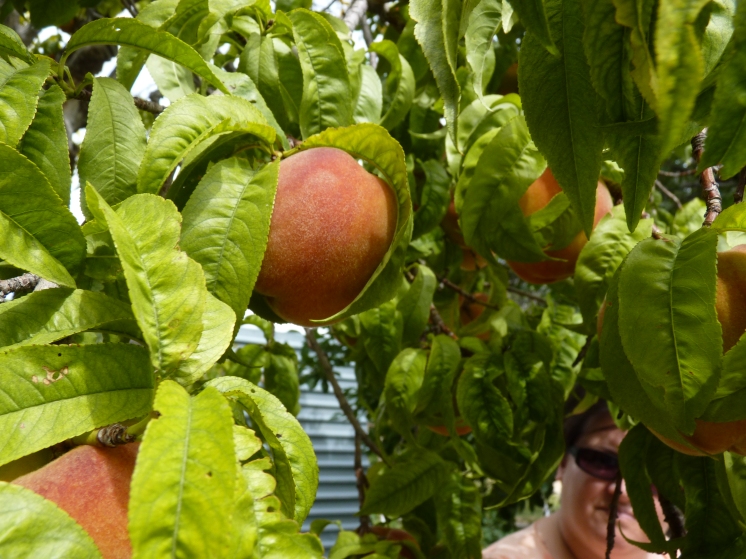 Peach trees on the ranch.

7 thoughts on “Not All Stuffed Animals are Cuddly”