I was listening to NPR the other day, and they mentioned it was the third anniversary of the disastrous Missouri River flood of 2011. I remember that event well, because not only was I there…but it changed my life. 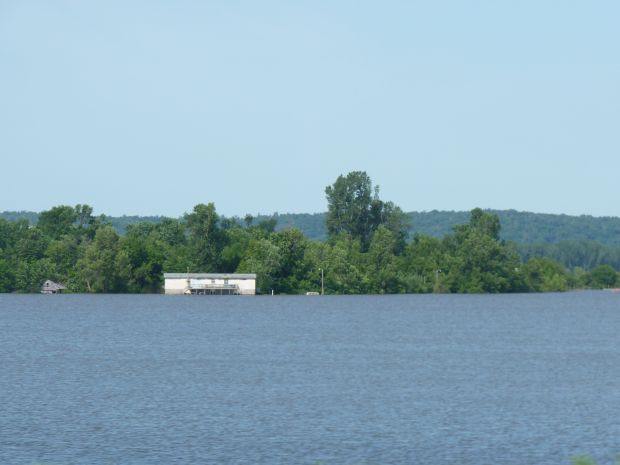 I was tooling along Interstate 29 on a sunny and hot morning in July, en route from Cameron, Missouri to what was supposed to be Cheyenne, Wyoming. This was during my solo road trip a few years ago (and can I just state, for the record, I cannot believe it has been nearly three years since I embarked upon that adventure?! It remains to this day one of the highlights of my adult life). A few minutes after I snapped the above photo, I was forced into a detour because the whole freakin’ interstate highway was underwater.

That detour took me deep into the Missouri countryside and eventually into Iowa. That was an extremely frustrating morning because I was shunted NORTH when I needed to go WEST. I had plans, you see. In my original blog post, I wrote about how I’d planned to stop for lunch at Raising Cane’s. While that was true, the possibility of missing out on chicken fingers wasn’t my biggest concern.

I was supposed to meet up with a girl two days later, you see.

Not just any girl. My wife, Tara. Of course, she wasn’t my wife back then. Or even my girlfriend. I’d only met her in person once, a few months earlier, but we had a friendship that had deepened over the years, and enjoyed each other’s company. Early on during my journey, she messaged me and said if I happened to pass through Ely on my way home, I was welcome to stop by her place for a home cooked meal and a free place to crash. This was a tempting offer, because by then I was already tired of meals served in paper bags (but again, food was not the primary motivation here). Unfortunately, Ely was nowhere near my travel route.

But Twin Falls was.

Tara was willing to drive the four hours to Twin (as the locals call it), so we made tentative plans to meet up there. It would have been my last night on the road, and it worked out great for my schedule. Cameron, MO to Cheyenne, WY: 616 miles, about 9 hours. Cheyenne to Twin Falls: 614 miles, about 9 hours. Twin Falls to home: 559 miles, 8.5 hours. The math was in my favor.

That damn river, however, was not. It cost me an extra 2.5 hours on the road, and prevented me from reaching Cheyenne. I ended up instead in Sidney, Nebraska – a place I had never even heard of before, and over 100 miles farther east than I’d planned on being that night. Which meant the next day I only made it as far as Ogden, Utah – 183 disheartening miles from Twin Falls. I called Tara from my motel room to let her know our planned rendezvous wasn’t going to happen. When I hung up, I poured myself a rum and Coke, determined to drown my sorrows in the heart of Mormon country.

I’m actually surprised I’ve never shared this story before. It’s something she and I talk about frequently. Our conversation usually begins with the words, “What if…?”

What if Tara and I had met up seven weeks earlier and a state away from where we actually did? Would the life we’re living now even remotely resemble that alternate reality? It would have been a memorable final night on the road, I know that much. But is that all we would have today, a fond memory of Twin Falls, Idaho? It’s possible that we would have started dating sooner, and everything else would have fallen into place as nicely as it has. Or maybe not. I might still be living in my townhouse, single, miserable, and broke. She could be in Ely. We could be married to other people. Divorced from other people. Dead. Though we can contemplate possibilities until the cows come home, there is no way of reading Fate’s hidden hand. The “what if”s are forever hidden behind a veil, an eternal and unknowable mystery.  The only thing I can say with any degree of certainty is, we’re both thankful that things happened exactly as they did.

All thanks to a flooded river more than 1500 miles away…

18 thoughts on “All Because a River Flooded…”