Last night, when the kids came back from their mother’s house for the week, I was telling them about my new job. “I start tomorrow!” I declared excitedly. To which Audrey replied, “Does that mean you’re unemployed right now?”

Hmm. I hadn’t thought about it that way, but realized that – technically, at least – she was right: I was unemployed, albeit ever so briefly. From 4:30 PM Friday until 8:30 AM Monday. A whopping 64 hours. Which beats the hell out of the 618 days I was out of work last time.

The celebrating began Friday evening, immediately after work. For some reason I actually worked a full eight hours that day and, in fact, didn’t leave early once all week. Which is kind of a bummer, because when you’re a short timer you can get away with stuff you normally couldn’t when you have to worry about actually holding onto your job. I had moments where I was tempted to stroll in around noon wearing a smoking jacket and fuzzy slippers, or dump my dirty laundry on the boss’s desk and ask him to “have it back to me, pressed and folded, no later than Thursday, please – and go light on the starch” or something equally absurd, but common sense won out and I remained professional all week. Damn me and my overbearing sense of responsibility! Plus, I was busy training my replacement. Did I mention they hired this guy the very same day I gave my two weeks’ notice? They don’t waste time around there, apparently.

I met Tara at our favorite local watering hole downtown, where we noshed on healthy delicacies like fried pickles and steak bites and had a few drinks. It felt surreal, saying goodbye to a job that it seemed like I had just started, but onto bigger and better things, right? 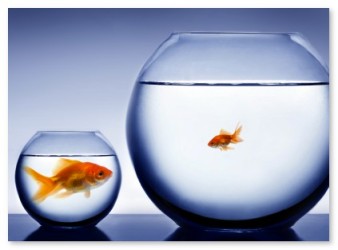 Because the company I am working for now is the smallest I’ve ever worked for. I’m used to large international corporations with hundreds of employees scattered across various continents. The music job was a little smaller, but we still had 100+ people (and it was also international so long as you consider Canada a foreign country). At this new place, I am employee #21. Instead of working in a multistory office building with a warehouse in an industrial park, I’m in a tiny office adjoining a mattress store where the “break room” is about the size of my bathroom at home. We don’t even have cubicles – the work spaces are a tight squeeze, separated by a prefabricated mini partition, and the “desks” are flat slabs of granite without drawers. If you turn around, you bump into somebody. It’s a completely different atmosphere than anything I’m used to.

And I absolutely love it.

There are benefits to working for a small company vs. a larger corporation. It really is like a family. The office has a ping pong table and a couple of flat screen TVs hanging on the walls. Lunches are “go whenever you want, come back as you please.” Time cards are nonexistent. There’s a profit sharing plan. And, we are having an amazing Christmas party in two weeks. Not only is the company shuttling us off to Mount Hood Meadows for a few hours of tubing in the snow, they are hosting a dinner and full bar for employees and their spouses or significant others at a swanky hotel in Troutdale – and springing for rooms so we can spend the night, too. And then giving us 5 days off afterwards. All of this on top of the fact that I am their official Content Specialist and earning a paycheck for writing. As the Barenaked Ladies once said, “pinch me.” (I may no longer work in the music industry, but I can still make references, dammit).

And the minor inconveniences, like the cramped work areas, are temporary. They’re going to be making changes to the office layout next month, and we will probably be moving to a bigger office in a year. It’s all good, kids. One day in – just one day – and I’m already diggin’ it.

I’m also really diggin’ the snow. Glad it’s back on the blog. Nothing screams Christmas like fake snow on your WordPress blog!

22 thoughts on “Smaller And Better Things”