You know how Charlie Brown was pissed off when he went trick-or-treating and all he got from every house he visited was a rock? The dude should stop complaining. A rock saved our Thanksgiving.

Let me set the scene…

It’s Thursday, 1:00 PM. We’ve got a turkey roasting in the oven, pumpkin and sweet potato pies chilling in the fridge, cranberries done, potato rolls complete, green bean casserole ready to go. One hour before our guests arrive (bearing mashed potatoes, creamed corn, and Tofurky for the lone vegan in the group), and Tara is setting up the new turkey fryer she bought from Cabela’s on the way back home from Seattle last weekend. She has been frying turkeys for Thanksgiving for years, and swears that a fried turkey is moist and delicious. I’d never had one before, nor had anybody in my family, so we decided to do two turkeys this year to give people a chance to compare. The weather is perfect (meaning: it’s not raining – it’s still overcast and chilly, but around here that constitutes “perfect” in late November). Tara sets up the fryer out back behind the patio, hooks up the propane tank, lights it, and…

…the flame goes out.

There’s a button that you press to ignite the pilot. According to the instructions, you’re supposed to hold it down for five seconds, and then release it. At that point, the burner should stay lit. Only our burner apparently never got the message, and refused to do what it’s supposed to do. You know, burn. The only way the flame would stay on was if we held the button down. Crazy thing is, neither of us wanted to stand there and keep our finger on a button for an hour, so we decided to jury rig it with duct tape. That worked for a little while, but the heat from the flame was wreaking havoc with the adhesive, and it looked like our expensive new fryer was a bust, and the promised second turkey would never materialize.

And then, I spotted a rock, just a few feet from the fryer. I wedged it into position so that it lay upon the button, and just like that, Thanksgiving was saved. 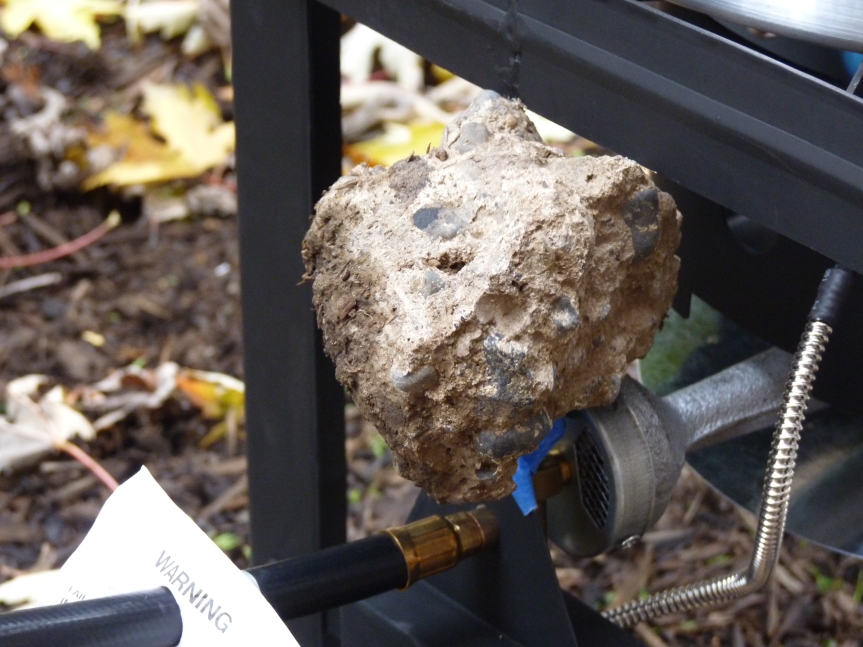 I think technically it’s more a chunk of concrete than an actual rock, but close enough. Thanksgiving turned out to be a rousing success. Even with nine people crammed into the townhouse – plus a cat and a dozen fish or so – it never felt too crowded. The food was delicious (both turkeys were amazing…well, all three, if you count the tofu loaf my cousin enjoyed), the conversation lively. We talked, we laughed, and we spent hours washing dishes. Which is why I broke down and bought a new dishwasher yesterday. But that’s another story. Let’s just say the holiday was a hit and, best of all, nobody ended up in the hospital this year! 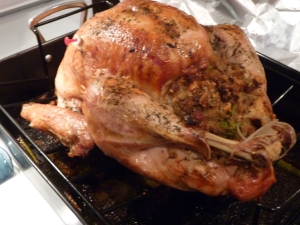 Hope your Turkey Day was every bit as wonderful.

By the way, the first thing my aunt asked was, “are you and Tara really engaged?” We told her, not really…not yet, anyway. Details on my last post.

Speaking of Tara, back in March when I was visiting her in Ely, we teamed up for a post together. Since that was a lot of fun, we wanted to do it again, and figured since we’ve been living together for seven months now and things are going very well, this would be a good time. So, without further ado, I hand the blog over to my wonderful girlfriend. What should we talk about, dear?

First off, I have to correct your term “jury-rigged”.  It’s JERRY-rigged.  It just sounds better…despite what Wikipedia says.

So, yeah, Thanksgiving was a success.  Nothing pleases me more than full bellies and smiling faces around the kitchen table.  While washing dishes, there were numerous outbursts of laughter and I knew our hosting the holiday was worth all the hard work, aching backs and tired feet.  I loved how Mark’s aunt was always asking to help, and when turning her down, she  joked that I gave the right answer.  I assured her I would sit on my ass and not lift a finger come Christmas Eve when we all gather again in Newburg.

Also, as much as I love and miss my Nevada family, it was quite lovely to not hear Fox News mentioned the entire evening!

That’s because we have an understanding in my family: any discussion of politics is off-limits. Similarly, we are not allowed to talk about  Family Guy, Walmart, or my past relationships. (Actually, I kid. Past relationships are fair game. The crazier, the better. Some of our dinner conversations last for hours!). Luckily, Tara’s stories rival mine. Just one more reason we’re a perfect match!

The day after Thanksgiving, I was off, but Tara had to work. I took advantage of the down time by enjoying a lazy morning spent catching up on DVRd shows. Then in the afternoon, I dug out the holiday bins and started decorating the house for Christmas. Tara is just now beginning to see how obsessed I am with holiday decor (I’m Clark Griswold, remember?). What can I say? The holidays make me happy, and I enjoy a festive-looking house! I may have crossed the line yesterday, however, when I suggested a trip to the store to pick up paper towels with snowflakes on them, even though we have a garage full of perfectly fine paper towels that are inexcusably just plain white.

It may be a sickness. I’m not sure yet.

Definitely a sickness.  Although, it was quite endearing to have him pull me through the house so he could show me all the decorations he had put up.  Remember that scene in Big Daddy when Julian is showing Adam Sandler his cubby hole at school?  And the capatiller?  Too cute!  And totally reminds me of Mark.  I can’t help but love him just a little bit more as he gushes over plans to cut down our own tree and take the kids to the Rheinlander for the traditional pre-Christmas German feast.

Fifteen years of  cynicism  is hard to overcome though, so I’ll just sit back, enjoy the ride, and try to get excited for another holiday season.  In the meantime, there will be lots of Bloody Marys.  🙂

Bloody Marys are definitely our thang! Take today, for instance. It’s been a lazy Sunday filled with Bloody Marys, football, and some much-needed down time on the couch. Since we’re always on the go, a relaxing day like today is rare…and welcome! The rest of the month looks to be pretty busy, too. We’ve got our Bruce Springsteen concert in just three days – totally excited for that! Seeing The Boss has been a lifelong dream. Next weekend we’re going to hang out on Hawthorne, hitting our favorite record stores, vintage shops, and restaurants; then it’s the aforementioned cutting-down-the-tree-and-holiday-dinner with the kids, then we’re headed to the Oregon coast to celebrate both our new jobs, then it’s Christmas and New Year’s and, bam! The year is over.

What an amazing year, though. Full of highs and…more highs. Something tells me 2013 will be even more memorable!

Anything else to add, babe?

More memorable than 2012??  That’s pretty hard to believe, but I don’t doubt it will be full of awesomeness.  I’m looking forward to planning lots of new adventures with the love of my life.  Remember folks, don’t live vicariously…live victoriously!!

23 thoughts on “The Rock That Saved Thanksgiving”