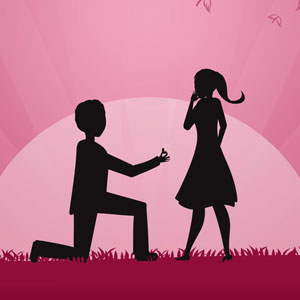 Monday morning, a coworker approached my desk and congratulated me on my engagement to Tara. Twenty miles away, on the other side of the river, at about the same time, Tara was receiving similar felicitations. (Lovely word, that. First time I’ve ever used it in a sentence). This, following a weekend of “congratulations!” and well wishes over Facebook and e-mail. Sentimental words from our closest friends and family, happy for us on this magnificent next step in our relationship.

One minor detail, though. We’re not actually engaged.

It all began over drinks (as so many of our more interesting adventures do). We were in Seattle for the weekend, visiting her family for an early Thanksgiving celebration. After a day spent playing with Tara’s seven-month-old nephew, we headed to Denny’s for cocktails, music and pool – or as we like to call it, “adult time.” We were having fun, laughing, joking, and being affectionate. At one point we talked about making plans to meet up with a couple of different friends who live in Sacramento. That’s when Tara said, “We might as well drive over to Reno and get married when we’re down there.”

When I heard those words, I either A) choked on my gin and tonic, B) fell off my bar stool, or C) all of the above. Because, for as long as Tara and I have been dating, she has been staunchly opposed to marriage. Case in point: when we were visiting the Oregon coast in May, we were on the beach at sunset, and some guy was setting up luminary bags and candles for a romantic, elaborate proposal to his girlfriend. I thought it was an incredibly sweet gesture, but before I could open my mouth to say as much, Tara beat me to the punch.

“Sucker,” she muttered beneath her breath.

So, you can see what I was up against! While her anti-marriage stance had nothing to do with me – she’d been unhappy for years with her ex-husband and the divorce, as they usually are, was painful – it still stung a little to hear her talk like that. Because, even though my own marriage crashed and burned spectacularly, I have no qualms against getting married again. I love Tara very much. We’ve been living together for seven months, and it’s been wonderful. Nobody else could make me this happy. Getting married is the logical next step, one that I would love to take.

In recent weeks her tone had softened. She actually started saying “we’ll revisit the issue after Rusty graduates next summer,” which may not ooze romanticism but was a marked change in attitude nevertheless.

Perhaps now you can understand my reaction to her sudden, out-of-the-blue declaration that we should get married in Reno, and soon.

“That’s the vodka talking,” I said.

“No, I’m serious,” she insisted. And didn’t appear to be slurring her words, which I took to be a positive sign.

I asked to get it in writing, but there were no cocktail napkins handy. Damn my luck. Just like a cop, there’s never one around when you really need it.

And then, to prove how serious she was, she posted the following on Facebook.

Which led to the aforementioned onslaught of congratulations. Even if nothing is official, it still feels good to see and hear so many positive comments. It gives me a sneak preview of what it’ll be like when we really are engaged, and I like the feeling! Tara admitted she does, too – and to her credit, she did not take back what she’d said on Saturday night, even in the cold, harsh, sober light of the following afternoon. Hmm. I kinda feel like the ball is in my court now, and I’ve been doing a lot of thinking. We’ll just leave it at that for the moment.

I have so much to be thankful for this holiday!

For the second year in a row, we’re having my parents, aunt, and uncle over for Thanksgiving. This time, we’ll also have my kids and one of my cousins, so it’ll definitely be a full house. I’m still unclear how we’ll actually fit everybody inside the condo, but I’m sure we’ll figure it out. Dad: you may end up eating your turkey on the toilet. Hey, a seat’s a seat – no need to be picky!

We were talking last night, and I was telling Tara how last Thanksgiving became this big turning point in our relationship, so the holiday feels extra special this year. That was the first time she met my family, and we bonded like crazy after I ended up in the hospital the next day. It was a Black Friday, indeed. What a crazy, unexpected, and terrible end to what was supposed to be a very special visit – and yet, we definitely grew closer as a result. Seeing the person you love and care about helpless and in pain brings out your compassionate best, no doubt. I’m sure this year will be much tamer in comparison, but a small part of me will be nervous until the sun sets on Friday and I find myself safe and sound in my own bed at the end of the day, rather than hooked up to tubes and high on morphine.

Just in case, I’m staying away from Chinese food.

Hope y’all have a great holiday!

12 thoughts on “The Proposal That Wasn’t”