Our TV started acting up last week, and for the life of me I could not figure out the problem. It wasn’t responding very well to any of the remotes we use, e.g., I couldn’t change the volume or switch between inputs or even turn it off. Sometimes it would work, but there would be a major delay. I’d push the volume button and it would take about 10 seconds to respond. I felt it was extremely unlikely that the batteries in two remotes would die at the same time, but tried replacing them anyway.

I unplugged the TV from the outlet, waited a couple of minutes, and plugged it back in.

Finally, in desperation, I said, “I guess I’m buying us a new TV this weekend!” and headed to bed.

The next morning, Tara said, “Good news! I fixed the TV.” I asked her what she’d done, and she said it was very complicated to explain, so she’d have to show me instead. OK, fine. At which point she got up from the couch, walked to the TV stand, and moved the holiday candle that was blocking the remote sensor.

In case you didn’t know, Tara and I are very much into vintage items, primarily from the 1960s and 1970s. If our new beanbag chair wasn’t a dead giveaway, there’s our lava lamp and record collections and beaded curtain in the wood-paneled basement. 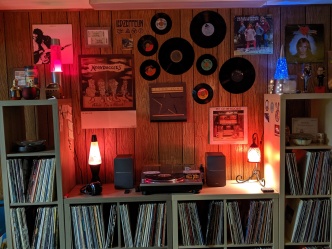 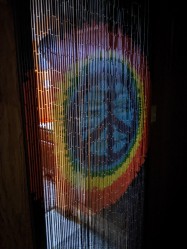 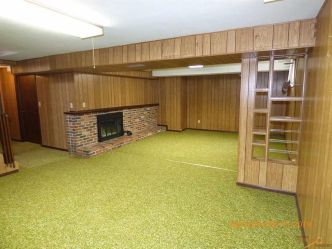 Yesterday, I headed to St. Joe Antiques Mall downtown to see if I could find anything new to add. This place is the biggest antique store in South Dakota, with 21,000-square feet of vintage-y goodness from 45 dealers spread over two floors. It’s paradise if you’re into this kind of stuff. I was thrilled to pick up these 1975-era canisters… 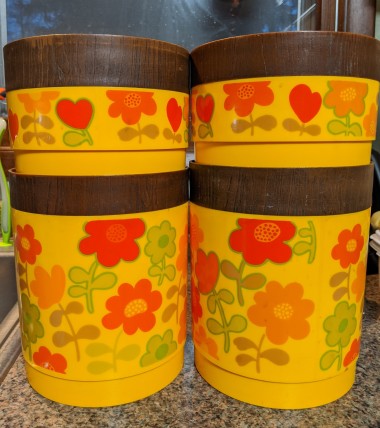 But then I found some items that really intrigued me: old medicine bottles and bathroom products, many of which still had their original contents. Mange medicine, liniment, quinol. I thought they’d make a perfect conversation piece on a cabinet in our bathroom basement (or at least raise the eyebrows of future visitors). 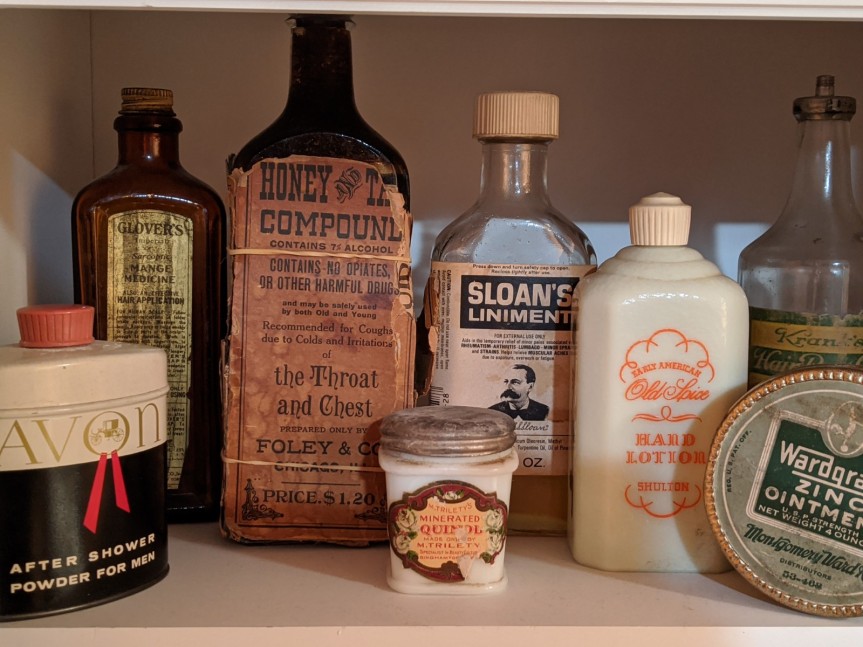 I was especially intrigued by the Foley & Co. Honey and Tar Compound, which advertises 7% alcohol but “no opiates or other harmful drugs.” Intriguingly, the bottle is nearly full—and according to my best estimate (along with the help of Google), about 100 years old. I thought the price ($1.20) was exorbitantly high for a century ago, but according to the National Association of Retail Druggists (NARD) journal from 1918, the medicine sold for $1.20 for a dozen bottles that year. It was made with alcohol, honey, and pine tar (yum!) and purported to “cure coughs and colds and prevent pneumonia and consumption.”

John and Harry Foley formed the company in Chicago in the 1880s and came under fire for selling patent medicines, a category of products that contained secret ingredients (many of which had narcotics, hence Foley & Co.’s non-opiates disclaimer) with little or no proven medical benefit. Some people were inadvertently poisoned after taking them, which prompted consumer protection laws like the Pure Food and Drug Act of 1906, which  didn’t ban these ingredients but required them to be listed on packaging (they weren’t actually outlawed until 1936). 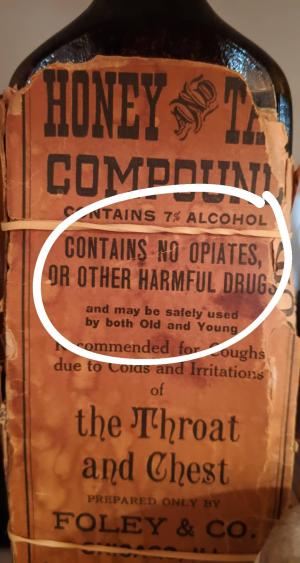 I find all of this fascinating. I wonder what 100-year-old honey and tar compound tastes like? (Don’t worry, even if I’m hacking up a lung I’m not going to actually try it!)

I haven’t even delved into that bottle of liniment, a precursor to products like Bengay, Icy Hot and Tiger Balm. Early liniments supposedly contained snake oil and gave rise to the term “snake oil salesman” for deceptive advertising. Fascinating.

I kinda want to start collecting these old medicine products now and researching their history.