I opened the front door this morning to grab the newspaper, and saw six deer trotting across the middle of our snow-dusted street in a formation so perfect, I half-expected to find them pulling a sleigh driven by a fat man in a red suit. Then I realized, ha-ha, that’s ridiculous, if they really did belong to Santa, there would be eight of ‘em. Maybe a couple were off lollygagging somewhere. My money’s on the two who seem the least invested in Christmas: Dancer (who clearly prefers hoofing on Broadway) and Cupid (I’m guessing Valentine’s Day is more his speed).

Surreal sight. You get the point. 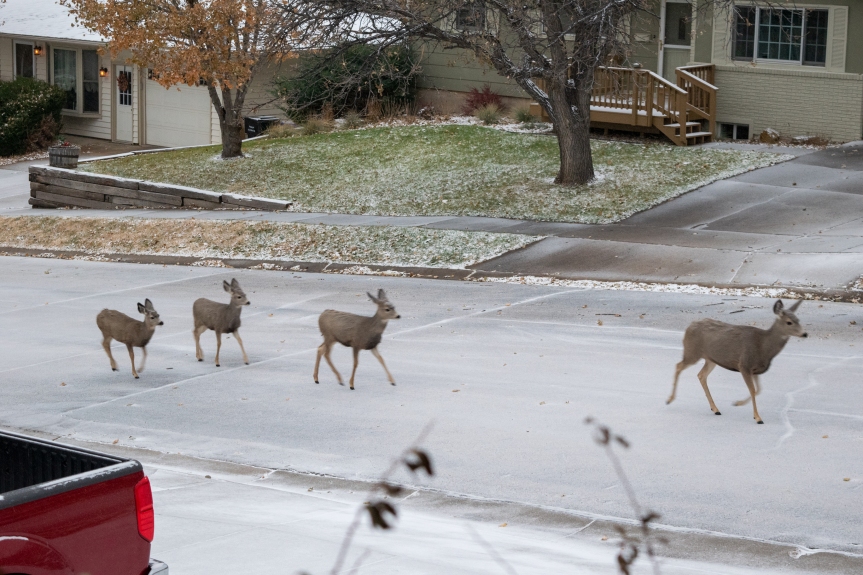 The snow did not let up; in fact, it intensified, and continued most of the day. It wasn’t a lot by South Dakota standards; about 2” in most spots, but the temperature was in the teens, and when I went home on my lunch, my Mazda struggled to get up the hill leading to my neighborhood. The traction warning light came on, I slid a little bit, and the wheels spun while attempting to find purchase on the too-slick street. Those were a few tense moments, but eventually I made it to the safety of my driveway.

This does not bode well for the remainder of the winter, namely because winter is still six weeks away, but that’s merely a technicality around these parts. That hill isn’t going to get any less steep, but the snow will fall harder and pile up deeper. I am revisiting the idea of buying a vehicle with AWD. A Hyundai Kona SEL Plus, preferably orange, with  a power tilting/sliding sunroof, shark fin antenna, optional mudguards, and all-weather floor mats.

I hope that made sense.

By the way, it’s going to be 62º on Saturday and 31º on Sunday. I know that doesn’t make sense. Tara said today, “Thank god I won’t have to go out into the brutal cold on Monday!”, knowing full well that I will have to, because some of us aren’t lucky enough to have Veteran’s Day off. Small price to pay for the privilege of a dream job, I s’pose.

Speaking of, last week I got paid to walk like an Egyptian around the streets of downtown Rapid City. My company has a friendly little lip sync competition with another downtown business every year to raise money for a local charity. This year’s theme was ‘80s music, and we chose The Bangles’ “Manic Monday.”

Yeah, kidding. We chose “Walk Like an Egyptian.” Duh.

Because The Bangles are an all-female band, only the women in the office did the actual lip-syncing. And they did a great job, all four of them; I was impressed with how committed they were to embodying the spirit of the ‘80s, right down to the big hair. Our staff photographer shot it like a music video and it turned out really good. The guys in the office only had to walk like Egyptians, so we had it easy in comparison…except the day we did it was super cold and windy. It was more a case of shivering like Egyptians.

If you follow me on Facebook, I linked to the video on my page there. If not, you’ll just have to trust me. We nailed it.