Holy crap. I haven’t written a blog post since LAST YEAR! I apologize for being so remiss in my duties.

I’m happy to report I survived my first week back in the trenches of Corporate America unscathed. Unlike back in August, I didn’t go bolting for the door in a mad panic this time, wondering what I’d gotten myself into. I have the government shutdown to thank for that; with all the federal agencies we contract with shuttered at the moment, there are no projects to bid on. Which, honestly, is a relief to me. I need time to build templates and work on revising/rewriting a lot of material before the shit hits the fan. Which it will, I am told, once the Feds are open for business again. My boss says we can expect a flood of proposals about three weeks after the government is back in session, so I am enjoying the peace and quiet while I can.

No regrets on choosing this job, either. I like my 8-5 schedule and having a private office and carpooling with Tara and exploring downtown on my lunch hours. Last week I spent one break reading in the library, a mere two blocks from the office; another day I walked along the path that follows Rapid Creek from Memorial Park to Founders’ Park and back, about a three-mile jaunt; and on Friday, I wandered around the biggest and most impressive vintage/antiques shop I have ever set foot in. I ended up buying some metal signs and old South Dakota license plates, which I hung on my office walls in lieu of fancy artwork. It’s a very manly display, if I do say so myself! Never mind that my knowledge of cars is limited to topping off the windshield washer fluid when it gets low. Oh, and I can pump gas like a pro! So there is that. 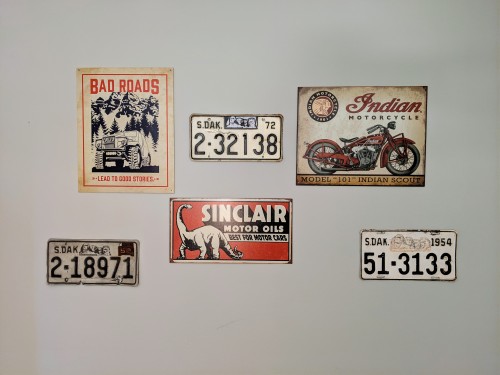 In any case, there is plenty to do between 12-1:00. When I was there in August I drove home for lunch most days, but why spend almost half your lunch hour in the car when there is so much to do downtown? I think back to the job I turned down, and how I’d have been cooped up in the office for nine or ten hours straight every day and always on call, and there is no doubt in my mind I made the right decision.

Yesterday we drove up to Sylvan Lake with every intention of hiking the closed-to-vehicles Needles Highway, but eight steps across the parking lot, Tara slipped and took a hard fall on the ice. She’s fine – her ego (and knee) are a little bruised, but she’ll live. Suffice it to say, we called off the hike. I was ready to call it a day at that point, but she insisted I at least walk around the lake so the drive up there wasn’t a complete waste. I’m glad I did, because the scenery was beautiful and the lake was frozen solid, covered in snow that was almost knee-deep in places. I ended up walking nearly to the middle, just to say I could. 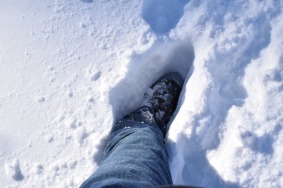 On the way home, we stopped into a bar and grill in Hill City for a bite to eat. We’d been there a couple of times before and always received excellent service, plus the food is really good, but for some reason the entire staff completely ignored us, never even acknowledging our presence. I was beginning to wonder if we might have inadvertently discovered invisibility, especially when one of the bartenders walked right by us (we hadn’t even been given menus yet) and struck up a lengthy conversation with a regular in the stool next to mine. We’d finally had enough of that nonsense and got up to leave. On the way to the door, one of the servers called out cheerfully, “Thanks for stopping by!” Was she joking?! Tara turned to her and replied, much less cheerfully, “Thanks for nothing!” Which was a little mortifying but also pretty funny. I’ll give them another chance because they make the best Bloody Mary in the Black Hills, but they’d better be on their game next time.

We stopped instead at Prairie Berry Winery. Their cafe serves excellent sandwiches, and we ordered cocktails. Well, to be technical, one of us had a craft beer on tap and the other got a cranberry cinnamon wine spritzer.

Please don’t make me tell you who ordered what…

6 thoughts on “Thanks for Nothing!”