I can sum up Halloween this year in one word: wet.

That much, we were expecting. Forecasters were telling us we were in for a good soaking three to four days in advance. What we were not expecting was the cancellation of our Tour of Untimely Departures at Lone Fir Cemetery, an event we’d purchased tickets for weeks in advance and were looking forward to all year. We found out by way of a sign posted to the gate upon our arrival. It read,

Unfortunately, due to high water, downed tree limbs and safety precautions, the Tour has been canceled.

Major bummer, but not really a surprise given the fact that it had been raining hard for a few hours by that point and we’d already navigated flooded streets. We had been planning on meeting up with our friends Mark (love his name) and Kara at a bar and grill called EastBurn in Portland anyway, so we decided to head over there earlier. Found out they were having a Halloween party and there was a $5 cover charge plus a bar menu only, but we did not let this get in the way of our fun. Sadly Tara, Mark, and I were the only ones in the place not wearing costumes, but Kara was dressed as a cat so she represented for us all.

EastBurn was really cool. There are multiple levels and they’ve got this great covered patio with heat lamps, bamboo, fire, and swings suspended from the ceiling at a few of the tables. We grabbed one of these prime spots and got down to the business at hand, said business being drinking and eating (and people-watching). I switched it up this time and opted for gin, because – let’s face it – vodka and soda gets boring. Also had a pork loin sandwich and sweet potato fries. Good stuff. Afterwards we headed to Mark and Kara’s house to play Scene It, missing out on the actual “party” part at EastBurn, but that was okay. They just bought their house a few months ago and this was my first time there. Cute little place and, hello – it’s in Portland. ‘Nuff said. The game was fun, even though I got trounced. When it comes to pop culture, music is more my speed than movies, which explains why the only question I got right was the one that asked for the name of the fictional rock band in Almost Famous.

I guess “still water” was sort of the theme for the evening, come to think of it…

Did I mention the swings at EastBurn?

So even though our plans changed, we still had a pretty good Halloween (which I am now calling H-allwet-een). Got home well past midnight, but thanks to DST coming to an end it really wasn’t too bad. Maybe next year we’ll  have an opportunity to do the cemetery tour. At the very least, if we do go out I’ll make sure to be more prepared.

Friday we had a costume contest and potluck at work. I did not think I was going to be able to put together a costume in time, but ended up recycling pages from a “Word of the Day” calendar and came as a dictionary. It doesn’t get much more homemade than this, folks. 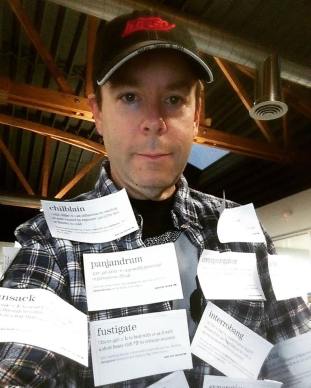 Surprisingly, the costume was a hit and I was actually in the running for the grand prize but lost out to Fred Flintstone.

My white chicken chili was also a hit. I do love a good potluck, but talk about a random assortment of food. It’s not often you end up with a hush puppy, a turkey meatball, a Thai salad roll, guacamole, Harvest Cheddar Sun Chips® and a handful of baby carrots sharing the same plate space. And yet, this odd combination somehow works.