I am so glad it’s May 5th. Not because I have a special affinity for Cinco de Mayo (though, hello nacho bar at work!). It’s just that, if I see one more lame May the 4th be with you post on social media, I am going to scream.

It’s not that I’m anti-Star Wars. I like Yoda as much as the next person. Hell, I once dressed up like C3PO for Halloween. (My brother was Darth Vader that year, proving that he was much cooler than me back in the day). But this pun has been so beaten to death, it makes me want to jab a lightsaber in my eye. I chuckled the first time I heard it…but that was three years ago. I haven’t even cracked a smile since.

In case you don’t get it, “May the 4th be with you” is a play on the famous Jedi line, “May the force be with you.” If you don’t know what a Jedi is, clearly your pop culture skills need work. Every May 4th, people take up the rallying cry ad nauseum.

It started when I arrived at work… 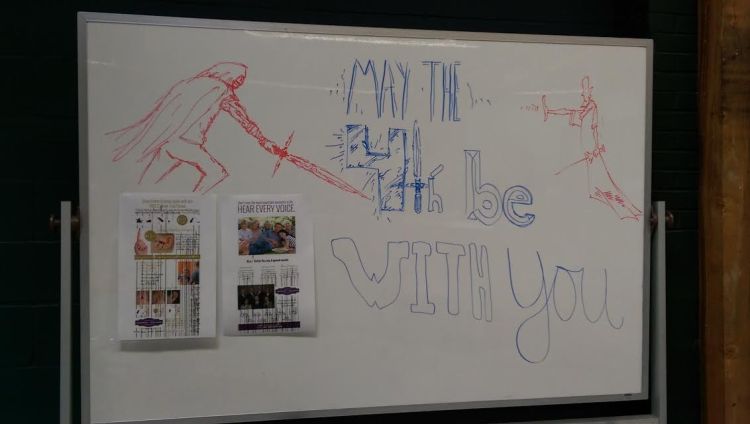 …and was a steady barrage the rest of the day. Every time I scrolled through my Facebook newsfeed to see photos of people’s dogs and lunches and find out the color of their aura or which Game of Thrones character they embody most, I was assaulted with May the 4th nonsense. This trivial fluff was getting in the way of really important matters! Because of the clutter, I almost missed the invitation to “like” my friends’ uncle’s cousin’s neighbor’s daughter-in-law’s nail salon page. Close call, people! And I nearly overlooked the hilarious George Takei meme that was sandwiched between a picture of Bad White Police Officers and that Timehop shot of my friend from one year ago (but God loves me, so it’s all good).

May the 4th is just too stressful these days. May 5th? Much better.

Or should I say mucho better? After all, it’s Cinco de Mayo, and my newsfeed is going crazy with that topic…

And also Bernie Sanders. He’s running for President. Too bad he’s a Socialist. You just know he’s going to take away all our guns and privatize healthcare.

My buddy from Wisconsin’s sister is holding a Scentsy party and I’m invited!