Last night we had dinner with Hilary Swank.

OK, the Oscar-winning actress didn’t show up at Portland’s top-rated restaurant Beast to dine with us specifically, but we were seated at the same communal table. She was there with her father and other family members, who apparently have connections with the local area. Hilary lived in Bellingham as a child, and her dad was a Portlander up until a few years ago. I didn’t know those things at the time, and even though Tara immediately recognized her, I had my doubts. It’s not everyday you have a run-in with a Hollywood celebrity in Portland, after all. But she kept insisting it was her, the star of Million Dollar Baby, Boys Don’t Cry and other films. I had to admit, there was more than a passing resemblance, but figured she was just one of those women people are always mistaking for somebody famous. Like the way people are forever confusing me with Matt Damon.

Tara asked the diners next to us whether they thought Hilary Swank was seated at our table, and they had already come to that same conclusion. Still, it wasn’t until we got home and I Googled her father that I was 100% convinced we had been dining with Hilary Swank. Because the old guy whose shoulder she was resting her head upon between courses was clearly, beyond the shadow of a doubt, Steve Swank, the same man whose picture was online.

“How cool!” I said to Tara excitedly. “That was Hilary Swank!”

This reminded me of that episode of The Office where the characters got into a debate over whether or not Hilary Swank is hot. I remember at the time being very much in the no-she-is-not-hot camp. But I have to say, she looks better in person. 5 years later I think I’ll officially change my position on the matter.

Even if Hilary Swank hadn’t been there, it still would have qualified as one of the greatest nights ever, because – start to finish – the meal was the best of my life, hands down. Beast is the brainchild and baby of Naomi Pomeroy, a James Beard award winning chef who starred on Top Chef Masters who, incidentally, makes great food. It’s a prix-fixe six-course meal that changes every Wednesday. Seasonal, local, and organic. The menu is made up of foods that are hard to pronounce. We had the following:

Every course was fantastic. Highlights included the steak tartare, foie gras bon bon, carrot puree, fried chèvre, and dessert. Actually, I take that back. The whole meal was a highlight. We ordered it with the wine pairing (3 whites, 2 reds, 1 rose) and French press coffee with dessert. You might not want to look at the bill if you suffer from a heart condition, but this was Tara’s Christmas gift to me, so it was both a splurge and a special occasion.

We would definitely do it again. 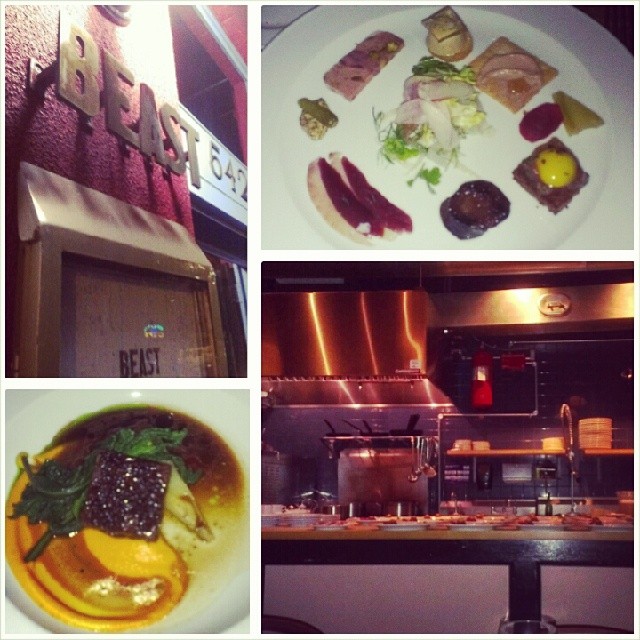