That first day back to work after vacation? All I can say is, ouch. And I actually like my job!

I’m trying not to think about the fact that a week ago, I was wandering the Vegas strip, having the time of my life. Today I’m wandering from my cubicle to the conference room! And the bathroom! THIS is the real jackpot!!

It truly was a great vacation, and Tara and I had the times of our lives. But it wasn’t without incident. And this is where I’d better throw in a disclaimer saying, WARNING: MATURE CONTENT. I’m not going to sugarcoat anything that was said, because it will lessen the effect of the words spoken.

Our last evening in Ely actually got pretty heated. Thursday night, we were gathered in her dad’s house, Tara making dinner. People started dropping by unexpectedly. I guess that happens in small towns, where everybody knows everybody. They were all friends and family, anyway. Suddenly there were half a dozen people gathered around the kitchen table, drinking beer, and they decided to start railing about the social injustices of the world.

In small town America, social injustices = too much freedom and power for blacks and gays.

I had been warned that her family and friends had a conservative streak. I just didn’t realize it was a mile wide and their attitudes dated back to approximately 1957. I tried to ignore them, to tune out their racist and homophobic blather, but it was getting harder and harder to do so. They were upset, among other things, that “fags” were in their faces, forcing their views on everybody else. I could feel my blood boiling over their blatant intolerance. And then Tara jumped in with a huge “Who gives a fuck whether two guys want to get married? Why do you care? It’s their business, not yours!” A perfectly logical and sane argument that, in my opinion, should have shut everybody up. Only it was like adding fuel to the fire. “It’s not natural.” “There’s something wrong with their heads.” “They just haven’t found the right woman yet.” These beer-swilling, gun-toting, Romney-loving good ol’ boys were spewing crap that predated the civil rights movement. And then one of them had the nerve to say it was “their choice” to be gay, and I couldn’t hold back any longer.

“You think it’s a choice?!” I asked, shocked by the ignorance. “Honestly? You really believe that?! Why would anybody choose to be treated like a second-class citizen and subjected to hate and intolerance?”

But of course, it did no good. In one ear and out the other. There is no changing the minds of those whose beliefs, no matter how awful and wrong, are so firmly entrenched. I was furious, and went outside to cool off. Literally. It was like 21 degrees out there, but the cold felt good. Raw and honest, cleansing the hatred that hung like a thick fog inside.

It’s a real dilemma, because on the surface, I like these people. They are part of my family now, and I don’t want to draw battle lines that cause trouble whenever they’re crossed. It’s important that I maintain a good relationship with them. In the end, I was glad I spoke my piece, because as my friend Monica reminded me while this was going down, Isn’t silence consent? When we sit quietly by, we are part of the wrong.

Indeed. I would rather risk their wrath than ignore their hatred. I went to bed that night with a clear conscience.

Tara says she’s been putting up with this kind of bullshit all her life, and is used to it. It’s a small town mentality, especially in rural Nevada, where blacks and gays are few and far between anyway, and Portland feels like a different planet full of strange and unusual sights, sounds, and attitudes. And I haven’t even touched upon gun control or abortion, but you can pretty much imagine how those topics go over. We had an interesting conversation with her sister Maggie, who says education plays a large role. When it’s all their friends know, and their family, it’s all THEY know. Take a simple term like jerry-rigging; it’s what I’ve called the art of fixing something using a crudely improvised design all my life. Well, in their parlance, it’s called “nigger-rigging.” Always has been, always will be. I absolutely cringed when I heard that, but they think nothing of saying it out loud. My argument is that simple compassion should steer their behavior, that morals should dictate their actions. It’s wrong to treat a person differently because of the color of his skin or his sexual orientation, so why do it?! Simple as that. But I guess I’m just hopelessly naive in believing that should be enough. Bigotry has existed as long as societies have flourished. It’s not just going to end overnight.

“This generation is more accepting,” Maggie says, and I agree with that. Little by little, we are wiping out racism, homophobia, and unbiased hatred. We may never change the minds of older bigots languishing in rural small towns, but at least there is hope for the future.

Not coincidentally, that evening was when the homesickness set in. I have never missed Portland so much in my life. It’s a city full of acceptance and tolerance, where being different is considered a good thing. After all, it helps “Keep Portland Weird.” You’ll be back in the land of Voodoo Donuts, gay lovin’ liberals, and hippies before you know it! Monica texted me that evening, and I couldn’t help but smile. She was right, of course.

Fight hatred and racism. Don’t sit silently by. All it takes is one lone voice to make others think. And when people start thinking, change can come swiftly. 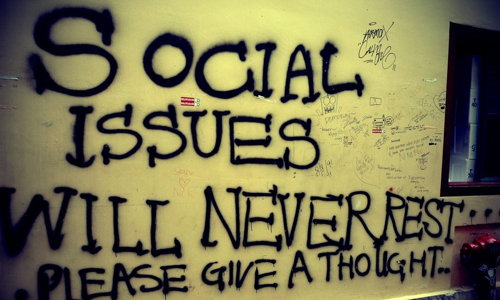