It’s been an odd past few days. A weird juxtaposition of birth and death. Rarely have the two commingled so closely together in my life.

This all began on Thursday, when I learned a member of my ex-wife’s family had been shot and killed in California. I didn’t know this person, had never met him or even heard his name before, so it was one of those that’s a bummer for the family moments, but nothing more. And then Roger Ebert passed away, news that I gave a “thumbs down” to. Being an avid moviegoer, I was a fan of Siskel & Ebert back in the day. What a shame, I thought, as I often do when somebody I know of but don’t know personally dies. But the strangest news was yet to come. Late that evening, thanks to a little bit of Facebook stalking on Tara’s part, we stumbled upon a photo of an ex-girlfriend of mine on her husband’s page, with a curious caption that referred to it as “our last picture together.” I didn’t really think that was a literal statement, because she’s 38 years old, but I was disturbed enough to type in her name on Google. Lo and behold, and to my utter shock, I found an obituary for her. She had died “suddenly and unexpectedly” ten days earlier of “complications from influenza.”

This unleashed a wave of conflicting emotions within me. I was no longer close with this girl. We hadn’t spoken in more than a year. Our “relationship,” which I always put quotation marks around, was fraught with frustration and, in the end, a lot of ill will on my part. I won’t go into every sordid little detail, but she was the first woman I became seriously involved with following my divorce, and for four years we struggled through periods of dating, followed by break-ups, followed by ill-conceived reconciliations. We were the definition of on-again, off-again, forever running hot and cold. During our long periods apart, I dated other people, some casually, others seriously, but always whenever I thought I had found happiness and moved on for good, she forced her way back into my life, pleading with me for another chance, swearing that “things will be different this time.” Only they never were, and finally I’d had enough. When we broke up for good, I hadn’t seen her in ten months. Our “relationship” was truly only a technicality at that point, but still, one that almost prevented Tara and I from getting together. Thank god it didn’t. That all ended over a year and a half ago, and to be honest, the freedom from her constant drama and struggle was liberating. I never missed her in the least. In fact, a lot of anger had built up inside me, because honestly she treated me like crap, lied to me constantly, and really, held me back from true happiness for a long time. Even her death shed light on more mistruths. Hers was a very tangled web, to be certain.

And yet, I wouldn’t have put myself through all of that heartache if I hadn’t loved her once upon a time. They say love is blind, and that is truly the case here, but yeah…I can’t deny there were feelings at one point. If she had chosen a different path, we would have been together. It’s as simple as that. Hers was a troubled life, and she could have saved herself a lot of misery by doing things differently, but was never strong enough. I won’t say any more, because I hate to speak ill of the deceased. I just feel it’s important to fill in as much of the backstory as possible to talk about what I felt when I read her obituary.

Because, the truth is, I didn’t know what to feel. I’ve led a pretty sheltered life, one in which few people close to me have died. I lost a grandfather before I was born, another when I was 7 years old. A grandmother less than a month after Audrey was born. Aside from a scattering of more distant relatives, that’s it. I’ve never had somebody I knew intimately, a person who was such a big part of my life for a while, and one who was so young, die. Especially unexpectedly like that. From something so…”normal” and random. I’d have felt better if she’d been in a car accident or gotten crushed by a falling piano, not because I wish pain on anybody, but at least accidents happen. They’re easier to accept. Your body isn’t supposed to break down until you’re old. You get the flu, you feel miserable for a few days, and then you’re better. That’s how it’s supposed to work, right? People don’t die from it. Not young people, anyway. Not in this day and age.

Tara was very sweet and understanding. Not at all upset that I might be feeling emotional over her death. She asked me if I was okay. And really, I was. It was more the shock of her unexpected passing; this unnerved me greatly. It made me realize that any one of us can die at any time, for virtually any reason. Or for no reason. I mean, I knew this on a subconscious level all along, but suddenly that fact was reality, shoved in my face, impossible to ignore. I can’t turn a blind eye to my own mortality or pretend I’ll never die. I will. Maybe today. Maybe in 50 years. But someday. I do feel sad for her. Nobody deserves to die at such a young age, with so much left to cherish and accomplish. It’s horribly unfair. Maybe she’d finally found the happiness that eluded her for so long, only to have it all snatched away in the blink of an eye. I especially feel bad for her mother, who has already had to bury a son and a husband. I only ever knew her by name since we had never met. But that’s a terrible burden for anybody to bear. And, I feel bad for her husband.

And I think of the weirdest things. Like how she’ll never know how Breaking Bad ends or find out whether the L.A. Kings ever win another Stanley Cup. How her cat outlived her. I always told her “life is short.” This was a mantra I repeated over and over again in an attempt to help her find her way, but even I had no idea how short it would end up for her. We had conversations about death and dying and what happens next. Hell, we fought over flu shots. I got one and she insisted there was no point. It doesn’t get any more ironic than that.

So, I feel bad that she passed away, but I never even came close to shedding a tear. Is it weird that I haven’t? My life is in such a different and better place now, the time she and I spent together feels like a lifetime ago. Besides, how can I reconcile the anger I hold in still (death hasn’t dimmed that) for the way she treated me? Perhaps I should be more upset with myself for putting up with it for so long, but that doesn’t excuse her behavior. Nothing does. And that is what I think about at the end of the day. Have any of you ever experienced the passing of a former flame? If so, how were you affected by it all? 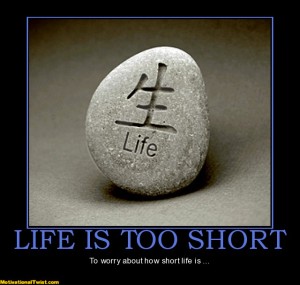 On the drive north to Seattle last Friday, Tara and I talked about her passing, and that conversation led to a general discussion of death. It wasn’t the most uplifting topic in the world, but I think it was a good talk. I love that we can share things like this with each other, openly and honestly. The gray skies and nonstop rain lent an oppressive, heavy feeling to the day. And yet, the reason for our trip was to celebrate life. Specifically, the birthday of her nephew, who just turned one. Even in the midst of death, life goes on, and that realization helped snap me out of the morbid little funk I was in. It was a fun weekend, full of life and laughter and vitality, and that was exactly what I needed.

“You can’t live your life in fear of death,” Tara said on the drive up. “It’s something you have no control over. Why waste precious time worrying about it when you could be living instead?”

She’s right, of course. I choose to live, for as long as I am meant to. And I hope you do the same. Because life is short.