So, when I stumbled upon an advertisement for the second annual Kenny and Zuke’s Picklefest in Portland this past weekend, I was stoked. When the inaugural event rolled around last summer, it caught my attention and I wanted to go. Alas, I had nobody to go with. The glory of pickled vegetables and fruits is a communal experience best shared, I figured. This year it was not a problem: I’ve got Tara, and she too loves pickles. When I suggested we check it out, she was game.

Saturday morning, we headed into Portland, kids in tow. Our first stop was the PSU Farmer’s Market, where we loaded up on fresh produce. ‘Tis the season to take advantage of nature’s bounty, and we did just that by stocking up on peaches, nectarines, blueberries, raspberries, boysenberries, peppers, sugar snap peas, fresh dill and cucumbers. The latter two ingredients for making homemade pickles.

Told you I love pickles.

After that we stopped by Escape From New York Pizza, an authentic East Coast-style pizza joint that my parents have been raving about for years. I grew up enjoying “tomato pies” from New Jersey and the thin, greasy, foldable pizza slices from New York, so I was eager to find a place out here that serves something similar. EFNY didn’t disappoint, although ironically, Tara and I happened upon a place we like even better a couple of weeks ago – Vincente’s in the Hawthorne district, for those keeping track. Then it was on to the Saturday Market for some shopping and people watching before we wandered over to our final destination: Wallace Park in northwest Portland, for the Portland Picklefest 2012. 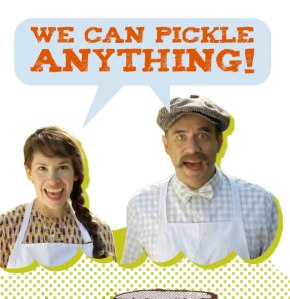 The entry fee was $8, and for that price you got to sample – and judge – 35 different varieties of pickles, voting for your favorites in four different categories: classic, sweet, non-cucumber, and Portland Weird. Trust me when I say, “weird” barely scratches the surface. Among other offerings, there was pickled pig’s tail, pickled green figs, kimchi with ghost peppers, pickled watermelon sorbet, pickled strawberry jello, pickled quail eggs, and pickled rhubarb with riesling. The four of us stood in line for over an hour before finally making it up to the serving area, where we loaded our trays and then indulged in a pickle tasting frenzy. Fortunately, there was plenty of shade, and a live band provided entertainment. Hey, there are worse ways to spend a Saturday, and while a few of the samples were a bit sketchy – I literally had to spit out the rubbery, chewy pickled pig skin – by and large, they all tasted pretty good. Even the pickled chili watermelon…and I don’t even like watermelon! Go figure. Turns out you really can pickle anything you set your mind to. Who knew?

I’m telling you, I can’t wait for Portland Picklefest 2013. We are so there.

Sunday was a much quieter day. The kids left early, and Tara took off for a visit to Seattle without me. Sniff. After spending approximately 100 days together, we are apart for the first time since she moved in. Not really out of choice, per se, but now that I’m working full-time it’s tough to coordinate schedules so that everybody can get together, and we figured she might as well take advantage of her time off to visit family. She’ll be back tomorrow, and I’ve gotta say, I can’t wait. I miss her terribly! It’s amazing how quickly you get used to living with somebody. For years I was on my own, and that never stopped me from making the most of things, but while before having all that freedom was fun, now it’s just a bummer. Still, I decided to take advantage as best I could, by cooking things Tara wouldn’t like (a spicy Cajun chicken dish and a cream of potato soup) and finally plowing through the last six episodes of Fringe that were taking up residence on my DVR. As fun as those things have been, it’s no fun waking up in the morning without the person you love next to you, and it sure sucks coming home after a hard day at work and not having somebody to kiss. While I’m thrilled she’ll be home on Tuesday, it’s kind of bittersweet, because she’s turning around next week and heading back to Ely for a visit and to take care of some business with her house, and will be gone five days. Man alive, I don’t know how I’m going to survive that long a stretch without my baby doll!