Driving home, I pass the empty shell of Hollywood Video.  The dirty windows passively reflect each passing car, but the parking stalls with their faded white lines sit unused, like washed-up actors seeking roles that have been passed along to a younger, sexier generation.  There is nothing left inside, not even the skeletal infrastructure of metal and wooden shelving.  It is barren and abandoned now, better suited for a ghost town than a strip mall.  I have thoroughly embraced the Netflix experience, for its ease and convenience and instantly rearrangeable movie queue, and yet, I can’t help but feel nostalgic as I drive by the darkened store.  Once upon a time, in a not-so-distant other life, that was my second home…

It was a weekend ritual.  The forty-hour daily grind of the work week over, we would head to the video store on Friday night, searching the shelves for the perfect escapist entertainment.  “We’re just browsing” may be nothing more than a leave us alone, we’re not interested excuse hurled at a persistent salesperson in a department store, but at the video store, those words meant something.  They were truth exemplified, for what was more fun than looking through rows and rows of movies, old films intermingling with newer ones, separated only be genre and letters of the alphabet?  You might discover old gems that way, movies you had seen long ago and forgotten in the intervening years, retrieving them to pass along to your kids.  Or, perhaps you were tempted into a film you’d always wanted to get around to seeing, but had never before made the effort to watch.  This happened one time with Cocoon.  I’d always been mildly curious, but could never bring myself to actually sit down and watch it.  Maybe it was the fact that it starred Steve Guttenberg.  Or perhaps the idea of octogenarians strutting around was off-putting, never mind that it was critically acclaimed and directed by Ron Howard.  In any case, I stumbled upon it one weekend after searching through the New Releases shelf (always the first stop, but you had to be quick about it, for the latest and greatest new-to-video films were always snatched up right away).  Seeing nothing that caught my eye, I leisurely perused the rest of the store, for time is no enemy of the out-to-pasture older crop of movies.  I spotted an intriguing looking cover – a mysterious beam of light, shining down from…where?  Heaven?  The Mother Ship?  Well, I had no idea, but I decided it might be worth finding out.  There was a dock, and palm trees, and a boat, and a man with a hat holding the hand of a young boy.  He appeared to be clutching a suitcase, ready to embark upon a trip to destinations unknown.  Intrigued, I picked up the plastic case.  Thought, hmm…why not.  And carried it over to the counter, where my membership card was scanned and a few dollars left my wallet.  The video was then handed to me next to the exit door, so I wouldn’t set off the alarm.  How antiquated it all seems now: the bulkiness of the VHS tape (how annoying was it when the previous viewer failed to heed the “be kind, rewind” mantra?), the race back to the store to avoid a late fee.  One January, we were housebound for days, prisoners of an ice storm that left us trapped and immobile.  Our first attempt at venturing out?  A harrowing, dicey drive to the video store, because the movie was due back.  I remember calling the store, pleading for sympathy because of the elements, but there was none offered.  That’s just the way it was back then, and we accepted it all as a small price to pay for the privilege of renting a movie and watching it in the 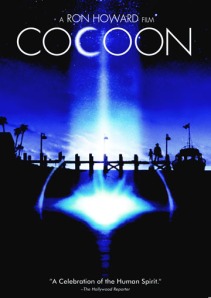 comfort of our own homes.  There was always a palpable excitement on the drive home.  You knew a fun and relaxing movie night awaited, and perhaps even included microwave popcorn and Junior Mints.  Simple pleasures, but undeniable.

I think that is what I miss most.  The whole movie-watching experience has lost its magic for me.  I always have a couple of Netflix movies waiting for me at home.  I go through 8-10 per month, on average.  They arrive in my mailbox one day, depart the next, and I can barely remember a week later what I have seen.  I don’t yearn for the hassle of driving to the store and dealing with unruly clerks and late fees and waiting weeks for that new release to become available – but I miss the thrill of deciding, on the spot, to check out something like Cocoon (which I thoroughly enjoyed, by the way).  Every Netflix movie arrives in a generic red-and-white paper sleeve.  There is no captivating cover to catch your eye and draw you in.  Sure, you get that virtual experience on their website, but it’s just not the same.  I probably would have still never seen Cocoon if I’d been weaned on Netflix my entire life.

The death of Hollywood is a sad thing.  People might call it “progress” and “inevitable” and “a bow to technology.”

One thought on “The Death Of Hollywood”