I have a coworker who just started watching The Office. He may be late to the party, but boy do I envy him right now. Imagine having nine glorious seasons’ worth of new-to-you episodes of a beloved, critically-acclaimed comedy series to watch?

Actually, I can. That happened to me just last year with Curb Your Enthusiasm.

So now this guy is coming into work every morning raving over the latest episode he has just seen, and his unabashed joy is contagious. God, I miss that show.

The only thing that would be even better than jumping into The Office for the first time? Doing that with Breaking Bad.

I can’t even imagine how amazing that would be.

My parents are currently in South Africa. I also really envy them; everybody talks about traveling the world when they retire, but how many people actually do so?

My folks have been to far too many countries to name. This three-week trip is their first on the African continent, and will include not one but two safaris.

Man. They are livin’ the dream.

I kind of hate that they are gone for such a long stretch right before we move away, but I’m sure they had no idea we were actually leaving when they planned the trip.

Or, knowing my dad, he just said “the hell with ’em – we’re seeing zebras!” and signed on the dotted line regardless.

With my parents gone, our weekend will include borrowing their grill and sunroom again. It’s become a tradition.

We’re also going to hit the farmer’s market for the first time this season (shame on us!). Plus, do some more packing. We missed last weekend since we were out having fun, so we’ve got some ground to make up.

One of the trickiest things is going to be transporting Sydney halfway across the country. She has been on very few car rides in her life, and I want to make her as comfortable as possible. After doing some research, I bought the following carrier, which comes highly recommended by many people. 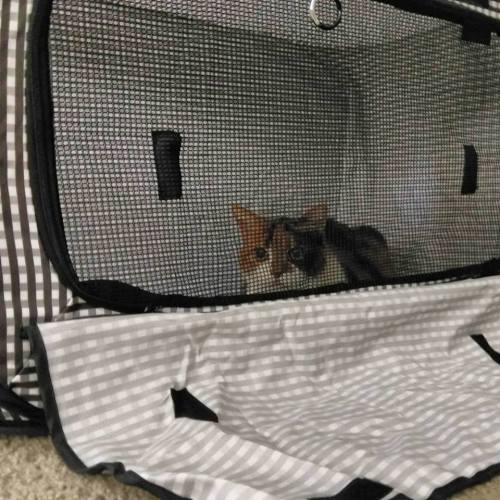 She looks right at home, huh? Acclimation is key. We are leaving the carrier out in the living room, and she frequently makes herself right at home in there.

I think we are going to start taking her on short car rides, as well. So we’ll add that to Sunday’s agenda.